Revealed: How JKIA lost 11,551 acres to clique of land grabbers 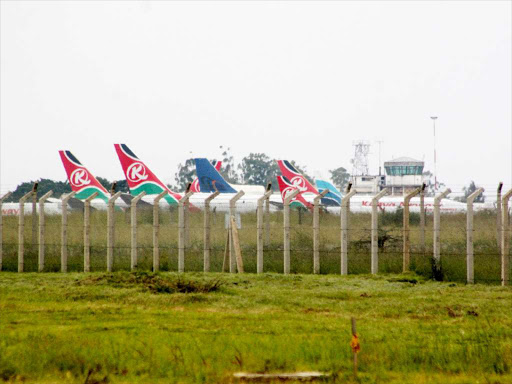 The grabbing of more than 11,000 acres belonging to the Kenya Airports Authority was a highly orchestrated scheme, the Star has learnt.

Many title deeds in possession of those claiming the 11,551 acres were generated in December 2002, at the end of President Daniel arap Moi’s 24-year rule.

The National Land Commission is investigating how the titles were generated in the midst of the confusion that characterised the 2002 general elections.

NLC is also investigating how the defunct Commissioner of Lands could have issued title deeds for land that already had a title in possession of KAA.

During the last hearing on Friday, lawyers representing those claiming ownership were at pains to explain how their clients held title deeds on top of an existing title.

Some claimed their clients were innocent buyers.

Many cried foul, saying the documents were processed by the Commissioner of Lands. They appealed to the commission to ensure that their clients are compensated.

It has a presence in JKIA, Kisumu, Eldoret, Moi international airports and Wilson.

KAA holds a lease of 99 years for the JKIA land.

Those claiming ownership have a lease of 99 years from 1999, meaning their titles are younger than that of KAA.

During the hearing, some of the lawyers said they will advice their clients to take up a sub-lease.

A sub-lease is an inferior interest to a lease.

Mukolwe who presided over the hearings at Bishop House offices said NLC will make its position known “very soon.”

The commission’s term comes to an end on February 19.

Commissioners Ema Njogu, Rose Musyoka and Clement Lenachuru were present at the hearings.

Mukolwe said the government acquired the land for expansion of the airport.

“It was not available for allocation,” Mukolwe told one of the lawyers.

The commissioners revealed that some of fonts in the contentious titles are not used in government documents.

“Some of the fonts have never been used before in the republic,”Mukolwe said.

KAA is fighting to recover its land saying it urgently needs to develop a second runway to accommodate more flights.

NLC was told that one of the daring private developers wanted to construct a petrol station within the flight path.

“We declined because it is not allowed,” KAA lawyer James Nyiha told the commission.

Nyiha presented Google Earth images showing that the plots in contention are inside JKIA.

“An internal patrol road meant for enhancing security inside JKIA has also been grabbed,” Nyiha said.

The road, which is within the second runway, has not been developed.

Mukolwe wondered how new title deeds had been obtained on top of the mother title that is with KAA.

Nyiha said there were several illegalities and those claiming ownership must be kicked out.

NLC also found out that a bank gave a loan to a company which had claimed ownership of the land.

Milicons entered into the loan agreement with Diamond Trust Bank on July 8, 2015, over the land Ref No 25471.

The firm is among companies accused by KAA of encroaching on airport land.

Surpisingly, KAA was not aware of the deal.

It was not clear whether the bank conducted due diligence before the transaction.

Some of the developers have attempted to develop the plots they claim.

However, their requests have been turned down on safety grounds.

Other claimants have gone ahead and developed the land without required approval.