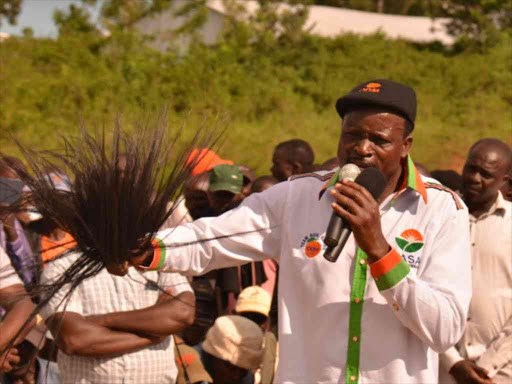 DCI officers have summoned a former close business associate of Migori Governor Okoth Obado to record a statement about an alleged plot by the county boss to kill him.

Investigators are understood to have received an anonymous letter detailing a scheme by Obado and his associates to eliminate Jared Kwaga, who had close businesses dealings with Obado. The two have had a falling out, the reason is not clear.

DCI officers are reported to have camped in Migori this past weekend and interviewed several people. They are expected to interview both Kwaga and Obado.

By 6pm, Obado had not returned calls or responded to text messages seeking comment.

However, spokesman Nicholas Anyuor yesterday told the Star the governor is not aware of such allegations.

“We have not been informed, the governor is also not aware. We hope this is not political propaganda to spoil the image of the governor. The governor has never wanted to kill anybody,” Anyuor said.

Yesterday the Star learnt that Kwaga has previously expressed fears for his life, even claiming that unidentified people had been trailing him in unmarked cars.

Yesterday Kwaga confirmed the DCI had summoned him to shed light on a plot to murder him.

“DCI officers have summoned me to record a statement with them,” he told the Star.

The Ethics and Anti-Corruption Commission has gone to court seeking various orders against Kwaga relating to millions of shillings that he allegedly wired to Obado’s children abroad.

The EACC is said to believe the money is linked to fictitious contracts undertaken in Migori county.

In court papers, however, the EACC paints a picture of Obado and Kwaga as inseparable.

“Communications link analysis indicates that the governor is in constant communication with Jared Kwaga,” EACC said.

In October last year, Obado and his two aides were arrested and charged with the gruesome murder of his lover Sharon Otieno, who was seven months’ pregnant with Obado’s son.

Sharon, 26, was tortured, gang raped and stabbed numerous times, especially in the belly to kill the foetus. Her body was dumped in a thicket near Oyugis town in early September last year.

Obado, personal assistant Michael Oyamo and Migori county clerk Caspal Obiero were arrested and charged with double murder: that of Sharon plus her unborn baby.

It remains unclear exactly what business dealings or other issues triggered the falling out between Kwaga and Obado.

However, the EACC says in court filings that Obado and his family worked with Kwaga to orchestrate a Sh2 billion theft from Migori county coffers.

“Preliminary investigations have raised reasonable suspicion that the embezzled public funds have been used by the governor, his wife and the said close proxies, the respondents herein, to accumulate property and illicit wealth,” EACC says in one filing.

The bad blood is likely to fuel efforts of the EACC, that is going flat out to put Obado at the centre of the looting.

So far, the EACC has confirmed that Obado benefitted from fictitious contracts amounting to Sh38,949,376.

This was through money wired by Kwaga to the governor’s children in bank accounts in Australia and Scotland.

In November last year, Obado was dramatically arrested at a city hotel after eight guns were recovered from his homes during an anti-graft raid.

In the Sharon murder, Obado was held behind bars for a month and released under tough bail terms, including orders to stay at least 20km away from the boundary with Homa Bay, Sharon’s home county.

Judge Jessie Lesiit also ordered the governor not to contact, interfere with or intimidate witnesses.

Obado was ordered not to contact or intimidate parents, siblings and any relations of Sharon.

In the court fillings, it has emerged that Kwaga is a man of means with a vast amount of wealth and properties across the country.

The EACC has frozen his assets and that of six family members, including his wife and mother.

The High Court issued orders barring Kwaga and his family from selling or transferring 65 properties —including maisonettes, apartments and land — together valued at more than Sh382 million.

Of the 65 properties the High Court placed a caveat on 42 that belong to Kwaga, excluding 17 he transferred after police raided his home early last year.

The properties include four maisonettes in Nairobi, an apartment in Nairobi and several tracts of land mostly in Migori town.

“The Commission has established that in just four days after it carried out search on the 1st defendant’s [Kwaga] residence, he transferred 17 parcels out of the 59 parcels registered in his name to the interested parties herein,” the EACC says.

Detectives also want the seven suspects to forfeit to the government the 65 properties frozen by the court.

The Migori case rekindles memories of the Ngirita family of Naivasha, who were charged in the second National Youth Service theft. Suspects are charged with the theft of Sh468 million but the total involved could be much higher.

As in the Ngiritas’ case where three siblings and their mother are facing charges, in Migori, the anti-graft agency wants Kwaga, his mother and two brothers forced to refund the money allegedly looted.

Other suspects are Christine Akinyi and Carolyne Anyango Ochola, a sister-in-law to Kwaga.

According to the EACC, the seven family members registered 16 firms that were special purpose vehicles for fraudulently securing tenders from the MIgori county government.

EACC investigators established that some of the firms received huge payments from the county government before they were incorporated.

“In a span of slightly over three years, 2013-2017, these newly registered companies transacted a total of Sh1,971,179,180.20 exclusively received from the county government of Migori, which amount was glaringly disproportionate to their known legitimate sources of income,” the EACC told the High Court.