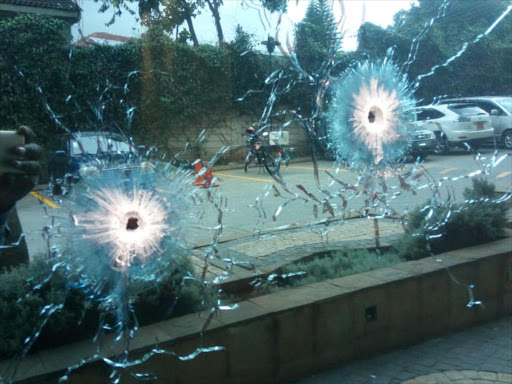 3:48PM: Suspected terrorists arrive at dusitD2 Hotel on Riverside Drive, Nairobi in a silver five-seater hatchback and walk toward security officers at the hotel’s gate, where they throw an explosive at the security agents.

3:50PM: A loud bang resembling a grenade explosion is heard, with black smoke swelling and rising up into the air.

3:55PM: Three vehicles on fire spotted at the scene.

4PM: Social media awash with claims of occupants trapped in dusitD2 saying the facility is under attack. Armed law enforcement agents arrive at the facility.

4:05PM Rescue mission underway as a man sporting a red T-shirt and a black pair of trousers is seen being moved away, with a gunshot wound in the back. He is bleeding profusely.

4:11PM: Students from the University of Nairobi, who reside in the nearby Chiromo hostels, are ordered to vacate the premises.

4:25PM: Ambulances with sirens arrive at the scene.

4:25PM: Recce squad security officers advance into the hotel to try and neutralize the attackers.

5:32PM The National Police specialised units are on site at 14 Riverside Drive to engage the attackers.