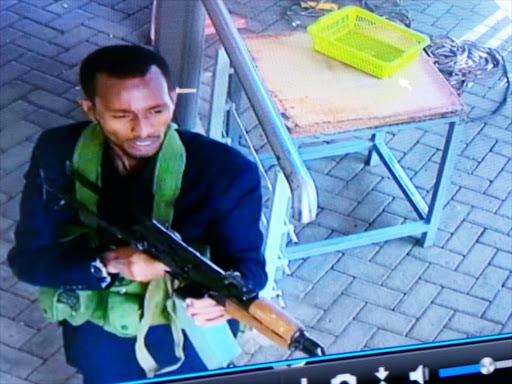 A cctv photo of one of the terrorists. COURTESY

The footage shows three of the gunmen dressed in black tops with green vests and Ak47 rifles.

In the footage, the suspected terrorists are seen signalling one another to take different positions as they fired indiscriminately to anyone on sight.

Minutes later, all the four attackers are seen in a different angle as they make their way to the hotel.

Two of them open fire at a white jeep which was at the parking lot.

They then split themselves into two groups and walked towards the hotel from different directions.

Earlier on Interior CS Fred Matiang'i said security officers have secured all the buildings at 14 Riverside Drive including the DusitD2 hotel.

Matiang'i told a media briefing that the country is now safe as the situation is now under control.

He has however not divulged any information on the four attackers

captured on CCTV while entering the premises.

"We are now in the final stages of mopping up the area and securing evidence and documenting the consequences of this unfortunate event," Matiang'i said.

The nine-hour operation started at 3 PM when four suspected terrorists stormed into the building and started shooting indiscriminately.

Families searching for their loved ones have been asked to call the Red Cross tracing hotline on 0715 820219.