Protests break out in Zimbabwe as economic crisis spirals 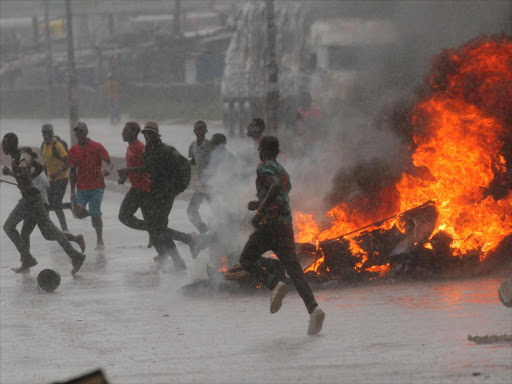 People run at protest as barricades burn during rainfall in Harare. /REUTERS

Protesters barricaded roads and burned tires in Zimbabwe’s capital Harare on Monday, as anger over the worst economic crisis in a decade spilled onto the streets and piled pressure on President Emmerson Mnangagwa.

Everyday life is getting increasingly tough with the price of basic goods spiraling and medical supplies in short supply.

Motorists wait for hours to fill up at petrol stations where soldiers are often deployed to break up fights over who is next in line.

News of the 150 percent increase in fuel prices was greeted with shock in Zimbabwe where unemployment is over 80 percent. The government sets fuel prices via the Zimbabwe Energy Regulatory Agency.

Hundreds of residents in the townships of Epworth, Mabvuku, and Mbare, all opposition strongholds, protested by setting tires alight and blocking roads with stones after the main labor union called for a three-day strike starting on Monday in response to the price increase.

The authorities are keen to avoid a repeat of post-election violence in August in which six people were killed after the army intervened.

Some commuters could be seen walking home from the city center because there were no public taxis.

“I am stranded in town now and I have no idea how I am going to go home,” Leeroy Kabanga told Reuters.

“Police has deployed officers in all residential, shopping centers and CBD (central business district) to conduct patrols, surveillance, stop and search and in the process account for unruly elements,” Home Affairs Minister Cain Mathema said in a statement.

Police fired teargas to disperse hundreds of protesters outside the High Court in Zimbabwe’s second city of Bulawayo, according to video footage from the Centre For Innovation & Technology, an independent news service.