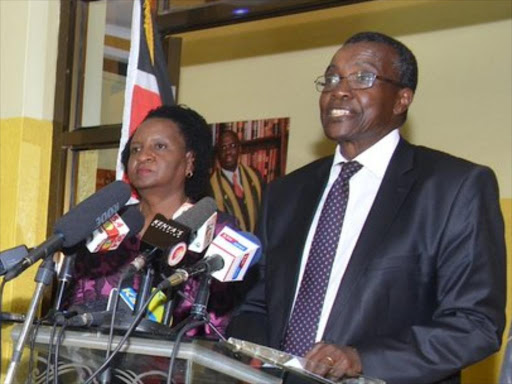 Chief Justice David Maraga on Monday dismissed claims that the Judiciary is the weak link in the war on corruption.

He instead urged the investigative agencies to bring watertight cases to the Judiciary if they expect convictions.

Speaking during the swearing-in of new EACC chief executive Mbarak Twalib on Monday, Maraga said the fight against graft must be carried out within the context of the rule of law and the Constitution.

President Uhuru Kenyatta has previously accused the Judiciary of slowing the tempo in the war on graft through lenient sentences, lengthy trials and releasing suspects on favourable bond terms.

But Maraga dismissed this notion and told the new EACC boss to collaborate with investigative agencies to submit formidable cases to court when they are also satisfied that they have chances of nailing the suspects.

"If you are also not sure that the cases you are bringing are strong enough to secure convictions, what else to do you expect? The result of such trials will be obvious," he said.

The Chief Justice admitted that the time cases take in court is a challenge the Judiciary is working on.

"I have brought 10 magistrates from their stations to Nairobi so they specifically work on corruption cases expeditiously," he said, adding that "they [the magistrates] have clear instructions from me to hear the cases on a day to day basis."

I have also instructed them to have a case heard until it is finished before picking another, he said.

The CJ challenged the agencies processing the corruption cases to do their part diligently "because Kenyans are watching."

"We [the judiciary] will do our part," he added

He asserted that the Judiciary will not allow anybody to use it as the scapegoat in fighting the vice.

DPP Noordin Haji and DCI George Kinoti were present during the ceremony.