Ruto denies Jubilee is in crisis, says it's all propaganda 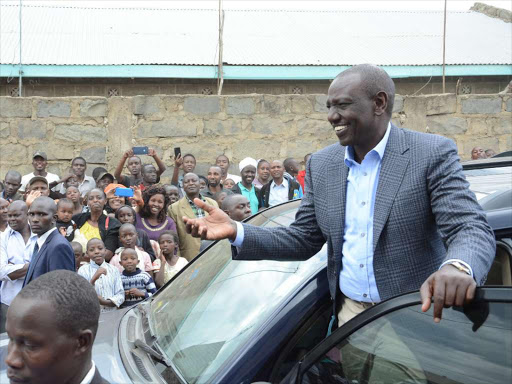 Deputy President William Ruto has denied that there is leadership crisis in Jubilee as alleged in some quarters.

He accused the media and a group of propagandists for peddling lies over the party adding that any discontented member was free to leave.

“We don’t have room for those peddling rumors and propaganda and they are free to leave Jubilee for other parties,” he said on Sunday.

The sentiments come barely a week after the party vice-chairman David Murathe resigned amid calls for party secretary Raphael Tuju to follow suit.

But Ruto accused some people of using propaganda to derail the party adding that he was fully behind President Uhuru Kenyattta and his agenda.

Speaking after a church service in Joy Celebrations Church in Naivasha, Ruto said that the party was fully behind President Uhuru and his agenda.

Ruto noted that the politics of splinter groups and factions was long gone adding that the government was committed to uniting the whole country.

“We know the press is in business but they should stop lying to Kenyans about the perceived differences in Jubilee,” he said.

During the colorful ceremony, Ruto directed all elected Jubilee leaders to focus on the Big Four agenda and stop politicking.

“We are fully behind the President Big Four Agenda and all our leaders should now focus on development as part of our meeting our manifestation,” he said.

On development, he said that plans were underway for the construction of the Industrial park in Naivasha which expected to offer youths job opportunities.

“Already we have companies that are eager to invest in various sectors like leather in the industrial park which has already been identified,” he said.

During the meeting that was attended by over 30 Mps, women reps and senators, the host Mp Jane Kihara was allowed to speak on their behalf.

“We are fully behind the government and the party and we shall continue to support the DP in his endeavors as he is a hard working person,” he said.

Kiambu Governor Ferdinand Waititu termed the ongoing politics in Jubilee as normal adding that things will soon cool down.

He said that Central Kenya was fully behind Ruto’s ambitions of ascending to power come 2022 adding that the recent handshake had not changed anything.

“We should, however, bring down the political temperature in the country and focus on development as it’s too early to start politicking,” he said.

Nakuru Governor Lee Kinyanjui on his part praised the national government for initiating various development projects in the county.

“We shall continue praying for the president and his deputy as they continue to serve the country,” he said.