Jubilee wrangles not good for the country - Wetang'ula 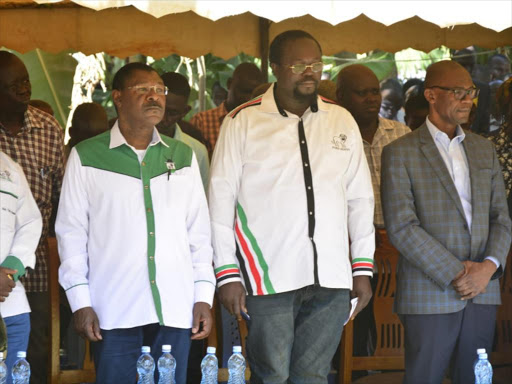 Ford Kenya leaders have criticised the recent wrangles in the Jubilee party.

Led by party leader Moses Wetang’ula, secretary general Eseli Simiyu and Bungoma county party chairman Wafula Wamunyinyi, the leaders said that it is very unusual for the ruling party members to tear each other apart as if they are the opposition.

They said the squabbles don't look good and sensible in the eyes of the electorate.

The leaders spoke on Friday at Musikoma Ward in Kanduyi constituency during the funeral of Mama Margaret Wanyama, a Ford Kenya party supporter.

"We have seen what Jubilee leaders are now doing to each other while their leader Uhuru Kenyatta is silent. We do not want to be involved but what we are telling them is that Kenya needs peace," Wetang'ula said.

The Ford K leader said that Jubilee leaders should know that they are public trustees and were holding the power for Kenyans.

Wetang'ula said when Jubilee leaders start abusing each other, they are creating an atmosphere for war in the country.

He maintained his journey to State House is unstoppable adding that he wanted to take over a country that is peaceful.

"When Raila and Uhuru made the handshake deal, we did not fault it but only faulted the process," Wetang'ula said.

"When we come together as leaders for the country's unity, let us not exclude other leaders because it will be dangerous for Kenya."

Simiyu said Kenya has healed from the 2007 post-election violence and leaders should be careful with their utterances.

He asked Jubilee leaders not to blackmail leaders to support them in order to attain development.

"They are telling some leaders to tore their line so that they can have development in their regions. Development is a must and not supposed to be begged,' he said.

Wamunyinyi asked leaders to refrain putting the country in a political mood and said that the electorate wanted development.