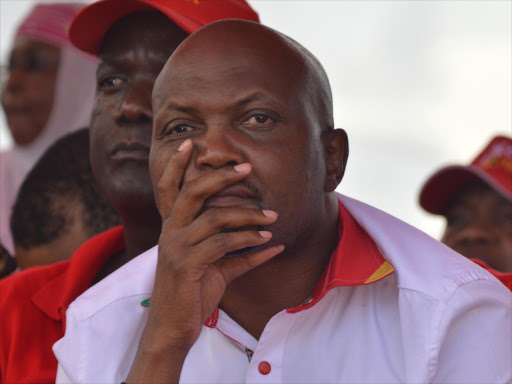 Gatundu MP Moses Kuria during a past Jubilee rally in Mombasa. /FILE

The Star has established from multiple sources that senior Jubilee officials and State House operatives asked Kuria not to resign yet.

Sources at the Speakers office told the Star that the MP had delivered a letter on Thursday tendering his resignation.

Speaking at a presser on Thursday, Kuria denied the reports of his resignation.

He said some people whom he did not mention have had selfish objectives and have been threatening his life.

"Those with selfish objectives and who have been jumping up and down with threats over my life details with which I have shared with the DCI who is my friend and a person with the capacity to act will work on it," he said.

Former Jubilee vice-chairman David Murathe had also allegedly tendered his resignation as Gatanga MP in 1997 then disowned the letter given to the speaker saying it was forged.

Post a comment
WATCH: The latest videos from the Star
by STAR REPORTER, @TheStarKenya
News
10 January 2019 - 15:00
Read The E-Paper