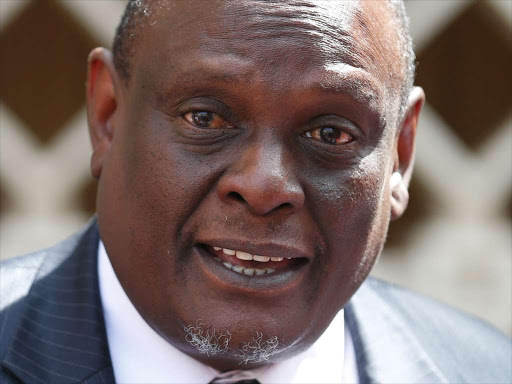 Jubilee Party vice chairman David Murathe has resigned from the party saying his continued stay in the ruling outfit is no longer tenable.

He has, however, maintained that his position that DP William Ruto is not fit to lead the country still stands.

On Saturday, the Jubilee boss said he will move to the Supreme Court to seek an advisory opinion on whether the Deputy President should be allowed to run for the highest office after serving two terms.

Murathe's attacks on Ruto have, however, been criticised by Ruto's allies and Jubilee leaders from Central region who have said they do not represent their views.

The leaders said their support for Ruto's 2022 bid is unwavering.

Bahati MP Kimani Ngunjiri and his Nyeri counterpart Ngunjiri Wambugu among other MPs had called on President Uhuru Kenyatta to rein on Murathe and stop his utterances against Ruto.

Wambugu said Murathe had gone against the president's stand that he does not want premature debates on the 2022 presidential elections because of its divisive nature.

"The fact that he has continued to sustain his position despite being asked to stop shows a man who is defiant and pursuing his own agenda independent that of President Kenyatta," said the Nyeri MP.

Wambugu told Murathe to retract his comments and apologise to the president if he wanted to continue working for the party or continue with the defiance and face their wrath.

"We will not allow him to continue embarrassing and destructing the president from his legacy agenda," he said in a statement.

Ngunjiri on the other hand called on the president to distance himself from Murathe and work on sealing the emerging rifts within the ruling coalition.

The Bahati MP accused the president of being a bystander as Murathe ran amok creating rifts in the party with his sustained attacks against the DP.