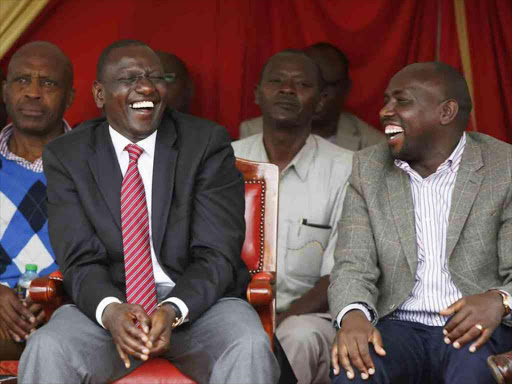 He said the DP should not waste time on distractors who are busybodies.

Murkomen, who spoke during a church service in Nairobi's Riruta Satellite, said the country needs healing and not more wounds inflicted by the exchange of words.

He said the people politicking on whether Ruto should be endorsed or not, have no idea of the MoU that was signed between President Uhuru Kenyatta and the DP.

"They were not at Nakuru where we drafted the MoU. I was representing URP and my friend Kindiki [Kithure] TNA. The deal was not even about winning the election but uniting the country," the Senator said.

"I say with a strong heart knowing where we started, Kenya needs healing," he said.

"It is not possible for anyone to ascend to the presidency through bloodshed. But going forward, we should not thrive on politics of fear."

Murkomen said it is unfortunate that Kenyans have taken politics as a matter of life and death.

He said getting the top seat is not easy and the DP should brace himself for the hurdles.

"The presidency is not everything and it is God who makes it possible. If the journey to the presidency was so easy, then all of us would have become presidents," Murkomen said.

"I'm telling the DPto be like the Biblical figure Nehemia who rebuild the ruined wall of Jerusalem. Ignore the naysayers," Murkomen said.

He told Ruto to remain focussed and to stay on course with eyes on the prize.

"We have no time to sit, consult, argue and debate with critics. We are busy building walls and we shall not be dragged to endless consultations," he said.

He said Kenyans should not be subjected to political blackmail. They should be allowed to pick leaders of their choice and be satisfied with the outcome of future election results, he said.

A day earlier, Jubilee Vice Chairman David Murathe reiterated that the DP should retire alongside Uhuru when their term ends.

Murathe who spoke in Siaya said he will seek the Supreme Court’s intervention to block Ruto from vying.

"Tutaenda hadi Supreme Court. Sisi hatucheki na watu. [We will head to the Supreme Court, we are not joking with anyone],” he said.

Murathe said the presidency is a pair and under the Constitution, the DP cannot seek a new term in 2022 since he will have already served the maximum two terms together with President Uhuru.

His sentiments were echoed by Cotu Secretary General Francis Atwoli who said Ruto will never be Kenya's President.

He said the Luhya nation has a problem with Ruto as an individual and not the Kalenjin community.

Post a comment
WATCH: The latest videos from the Star
by By PATRICK VIDIJA @vidijapatrick
News
06 January 2019 - 12:00
Read The E-Paper