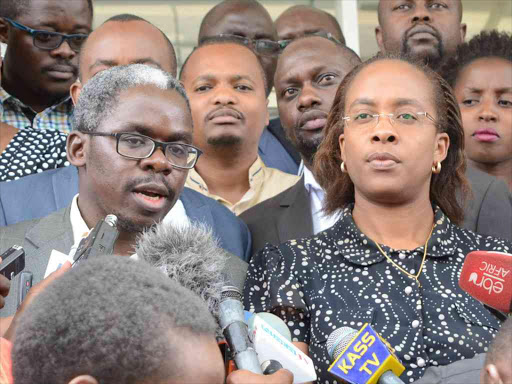 A medical lobby has raised concerns over the competency of Cuban doctors who were hired by the government last year.

The Kenya Medical Association is dissatisfied over the methodology of engagement, registration and licensing of the foreign specialists whose qualifications it says are unclear.

“The Association shall in the coming weeks propose legislation to deal summarily with charlatans and unqualified actors who put Kenyans’ lives at risk and get away only with slaps on the wrist,” KMA president Jacqueline Kitulu said on Saturday.

She spoke after a KMA National Governing Council meeting in Nairobi that was convened to discuss pressing issues in the health sector.

Officials from the Kenya Dental Association, Pharmaceutical Society of Kenya, and specialist medical associations were present.

“We do not know the qualifications of these people, therefore, we cannot comment about whether they are specialists or not,” KMA vice president Lukoye Atwoli said.

“We want a process that is transparent so that we know that if Atwoli comes from Cuba and he is hired at Kenyatta National Hospital he is what he says he is,” he said.

In June last year, the government hired 100 Cuban doctors amid sharp criticism from the doctors' union.

Every county was to get at least two of the specialists.

KMPDU Secretary General Ouma Oluga warned then that the importation of the doctors was a major scandal in waiting at the Health ministry.

"In every beautiful story in Kenya, there is always a scam. I won't be very surprised if in the near future you will be reading the same about the Cuban doctors," Oluga told Citizen TV on May 28 last year.

He criticized the hiring process of the specialists saying hundreds of qualified local doctors were still unemployed and should have been given priority.

The Health ministry defended the hiring, saying the specialists would bridge the country's gap in specialised service provision in public health facilities.

CS Sicily Kariuki said the selection criteria was based on critical service gaps, improvement of access and equity.

"They will reduce the preventable disease burden so that other specialists can focus on curative and rehabilitative health services as required," she said.

Meanwhile, KMA said it will oppose the push by clinical officers to be licensed to pre-authorise procedures and conduct diagnostic imaging on patients.

Currently, clinical officers are restricted from providing the above services.

“The Association notes with regret the recent trend in which unqualified persons are influencing legislation in order to classify themselves as professionals when in fact they are mid-level healthcare practitioners,” Kitulu said.

She said the code of professional conduct and discipline for medical and dental practitioners in Kenya expressly prohibits handing over the responsibility of patients to unqualified persons.

Kitulu warned doctors against handing over their roles to unqualified practitioners at their places of work.

“Practitioners are advised to adhere to this code, and are cautioned that the association shall not protect any practitioner who breaches this provision,” she said.