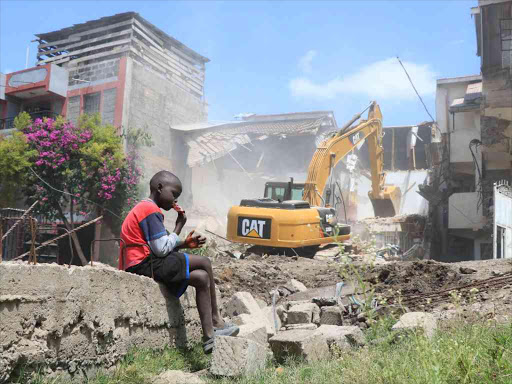 The auctioneer behind the demolition of houses at Nyama Villa estate in Kayole has warned the landlords against rebuilding the apartments.

“I am profiling a list of all those who are contemptuously attempting to reconstruct the demolished illegal structures for further legal action,” he said in a press statement.

According to Kariuki, the disputed land is private property whose title has never been contested.

He said that a court order issued in May 2014, by Employment and Labour Relations Judge John Mutungi is still in force.

“That court order was only temporarily suspended by the government pending consultations which are starting this week,” Kariuki said.

Muthithi Investments Limited had, according to the court order, sued 25 people believed to be residents in the disputed property in Kayole.

The judge had directed the Inspector General of Police and OCS Kayole to supervise the eviction of the 25 people and remove all structures from the said plot.

On December 19, last year, the government suspended demolition of buildings across the country until further notice.

The directive issued by Head of Public Service Joseph Kinyua came after the demolition of buildings in Kayole was met with an outcry from over 500 families who were left homeless after their houses were flattened by bulldozers.

“It is notified for the general information of the public that the government has forthwith directed the immediate suspension of all demolition of properties in all parts of the country until further notice,” Kinyua said in the statement that brought end to heaps of rouble across Nairobi.