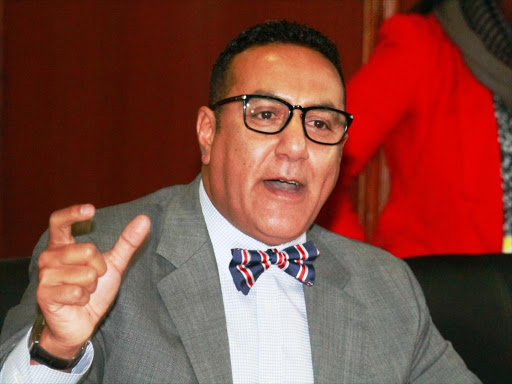 Cabinet Secretary Najib Balala when he appeared before the National Assembly Committee on Environment on July 31, 2018. /JSCK OWUOR

The Conservation world was this year drawn into mourning following the death of 11 black rhinos following failed translocation to their new sanctuary.

Nearly all translocations done before have been successfully done by the Kenya Wildlife Service personnell.

The movement of black rhinos was to start in 2016.However,drought prevented their movement to the parched Tsavo National Park.

Good rains however prevailed, providing plenty of food for the black rhinos.

The black rhinos were first sedated with a dart from a helicopter on June 26, blindfolded with a turquoise-coloured cloth ready for the seven-hour trip to her new home

Tourism and Wildlife CS Najib Balala presided over the translocation exercise at the ivory burning site inside Nairobi National Park.

The translocation exercise was aimed at decongesting both the Nairobi National Park and the Lake Nakuru National Park.

The exercise however flopped following the death of 11 rhinos at their new sanctuary- Tsavo East rhino sanctuary.

An independent inquiry showed there was negligence in the post-translocation at the release site in Tsavo.