I have a partner in Raila, Uhuru says in defence of handshake 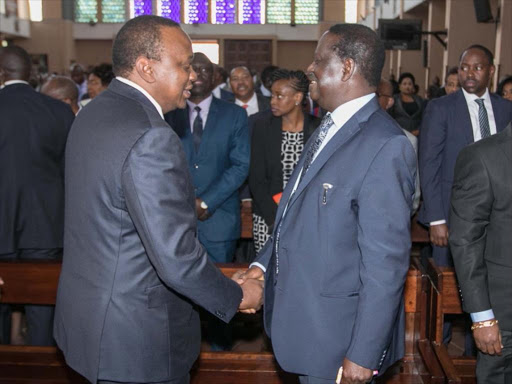 President Uhuru Kenyatta has said he will not be dissuaded from the Handshake and Building Bridges Initiative.

"I really believe I have a partner in Raila who believes in the agenda," he said.

The President spoke on Friday during a round table with journalists at State House, Mombasa.

Politicians allied to Deputy President William Ruto have treated the Handshake like a ploy to curtail his bid for the top seat.

But the President dismissed those engaging in 2022 election politics, insisting that he had "never talked about 2022 elections with Raila even for a day".

Highlighting circumstances of the electoral upheavals last year, the President explained that in the wake of the swearing-in of Raila as the peoples' President in January, it dawned on him that it was "probably time to reach out to one another and talk."

Uhuru noted it was time to confront the tribal suspicions and tensions that rock the country every electoral cycle.

"These [tensions and upheavals during elections] started from as early as 1992 and has prevailed every electoral cycle," he said.

"It picked up during and after the clamour for multipartyism in the country and since then our politics has been personalised and involved bloodshed."

Uhuru said that though he differed with ODM leader Raila Odinga politically at the time, he found that "we actually agree on many things."

"For example, we agreed that corruption is a serious challenge that need to be confronted," Uhuru said, adding that their agreement has provided the needed political synergy and goodwill in curbing graft.

"We also agreed that we need to look at our electoral system that makes some people feel excluded after every cycle."

Asked whether they had agreed on a referendum that would change the country's governance structure, he said that their discussions looked at issues that affect the society and how they can be solved for posterity.