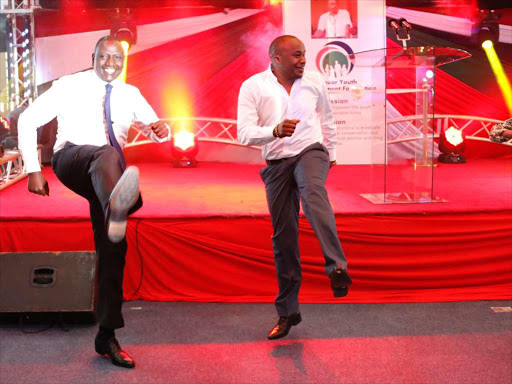 What was to be a smooth transition from President Uhuru Kenyatta to Deputy William Ruto is turning into a nightmare for the DP after fresh and more serious opposition emerged from within his Jubilee Party and populous Central Kenya.

And then there's the fact that some of Ruto's allies are quietly being removed from plum positions, while others re facing corruption charges.

On Wednesday Jubilee vice chairman David Murathe who is Uhuru's close ally, openly asked Ruto to retire alongside the President in 2022.

His remarks have triggered a political firestorm that has widened the rift within the President's ruling party.

On Wednesday, Murathe bluntly stated he Kikuyu community does not have any MoU with Ruto regarding support in 2022.

“If he (Ruto) has an MoU with Uhuru Kenyatta, then that was an agreement between two individuals,” Murathe said in Vihiga during the Maragoli Cultural Celebrations.

Murathe is not an ordinary politician.

Apart from being Uhuru's long-time friend, Murathe played a key role in a special group of senior individuals in government and from the financial sector, mainly from the Mt Kenya region. This group quietly but diligently campaigned for Uhuru's re-election and raised a lot of money.

Murathe pronounced himself just a month after Uhuru himself appeared to throw Ruto under the bus, saying his choice of successor would be a "shocker". The game plan was thrown into disarray.

In a terse statement to newsrooms yesterday, ex-Maragua MP Elias Mbau fired a rejoinder that the Kikuyu community will not succumb to blackmail into blindly supporting any candidate.

Mbau strongly backed Murathe that Kenyans must have the freedom to choose their leaders without being boxed into a corner.

“Our communities do mistrust each other because they are evil. They do so when they read evil in their leaders...The politics of extortion, corruption and arrogance must be opposed by all. We would better die on our feet than live on our knees,” Mbau said, calling a constitutional referendum a must.

Ruto is considered he face of the anti-referendum push backed by key opposition figures.

Further complicating the DP's political matrix, the powerful Kikuyu Council of Elders had in June asked Ruto to be “satisfied with his 10-year tenure as DP” and not to aspire further.

Ruto's ascendancy to power was hinged on the populous Kikuyu vote and that in his own Kalenjin backyard.

The two communities are seen to have 'the tyranny of numbers' that propelled President Kenyatta to power for two terms.According to the IEBC the Kikuyu number about seven million voters, while the Kalenjin are just below five million.

The presidency traditionally has been determined by five populous communities, the Kikuyu, Luhya, Kalenjin, Luo and Kamba.

Raila has already ring-fenced his Luo community and is fighting to retain the Coast region, despite frenetic efforts by Ruto to neutralise his influence and appeal to the region's sense of historical victim hood.

Ruto also has a herculean task to penetrate Western Kenya where he undertaken numerous charm offensives, given that ANC Leader Musalia Mudavadi is positioning himself as Central Kenya's alternative. And a pair of steady hands.

The Luhya community voted overwhelmingly for Raila in the past three elections.

After the March 9 handshake and camaraderie with Uhuru, Raila's fortunes in Mount Kenya appears to have amplified as leaders from the region troop to his office.

Uhuru and Raila have also become bosom friends, prompting fears the two have a secret power pact that excludes Ruto in 2022.

The high-profile visit by Uhuru to Nyanza, including Raila's Bondo home, set tongues waging about their 'real' mission.

The anti-Ruto forces in Central Kenya have been expanding and most former MPs oppose the region's automatic support for the DP.

However, Ruto's allies yesterday told off Murathe, claiming the former Gatanga MP has no political mandate to issue the Jubilee Party's position on such a weighty matter as succession.

Kikuyu MP Kimani Ichung'wa said only President Kenyatta as the party leader and Ruto as deputy can give party direction — and no one “masquerading” as a Jubilee official.

“The two humble gentlemen have not contradicted each other and they are not about to contradict each other in the near future. Who elected him [Murathe] to that office? Which constituency does he represent? From where does he draw his mandate?” Ichung'wa asked.

He rubbished Murathe as a political broker posing as the Jubilee vice chairman.

“For brokers, they can concentrate on brokering Chinese in this town, but when their stomachs are full, let them not vomit on us. The rest of us are busy ‘tangatanga-ing’ [traversing] the country to improve the lives of our people,” the chairman of the National Assembly budget committee said.

He went on, "In this festive season, I would honestly forgive anybody seeming to be drunk. But I would also encourage that when they are through with brokering, they don’t verbal-diarrhea on innocent Kenyans.”

“This is a Chinese broker who wants to perpetuate the same to the Jubilee Party to benefit himself at the expense of Kenyans,” he added.

Nandi senator Samson Cherargei hit out at Murathe, calling him an “insignificant politician without any authority to speak for the party”.

“This is a man seeking cheap relevance by attacking the Deputy President, because anybody seeking political relevance must attack the DP,” Cherargei said.

The senator weighed in on the Uhuru-Raila handshake,suggesting that a few politicians had hijacked it and weaponised it to kill the DP's presidential bid.

“They are using shadow-boxing tactics just because they claim to be close to the President to stir ethnic animosity against the President and the Deputy President’s plan to unite all Kenyans,” he told the Star.

He added, “I wonder why some people keep insisting that there is a political debt. The only debt we have is to Jesus Christ and nobody else.”

The Senate Justice and Legal Affairs Committee chairman said those opposed to a Ruto presidency had also hatched a plot to kill Uhuru's Big Four agenda to undercut Ruto.

“Some individuals are trying to scuttle Uhuru's Big Four because they know success of the Big Four will be a big plus for the DP. They want to make sure they have something to weaponise against the Jubilee candidate," he said.

Webuye West MP Dan Wanyama, a key Ruto ally in Western Kenya, warned that a section of politicians opposed to the DP’s State House bid were waging what he termed as a “personal smear campaign.”

“Let our politics be issue-based and not personal. Even our so-called competitors have no agenda,” he said.

“They are yet to even declare their candidate in 2022. We are aware this is political competition, but our competitors' approach is is corrosive,” he added.