Eliud Kipchoge: The hero who beat odds to excel at world stage 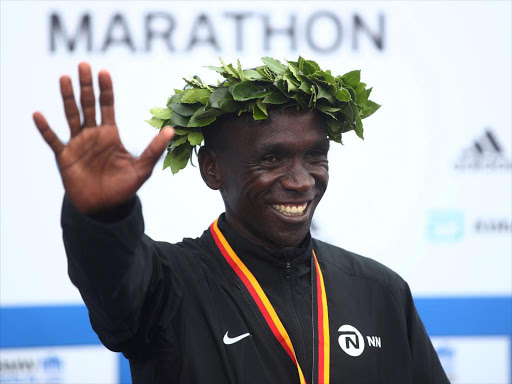 many will remember it as a year riddled with many corruption cases that saddened Kenyans.

But in the midst of the scams, the year presented an iconic moment that lightened up Kenyans' mood in the form of

Born in 1984, Kipchoge was the stunning face of Kenyan athletics.

Kipchoge set a new world record at the Berlin Marathon, shaving more than a minute off the previous best with a dazzling run, to land the one major running accomplishment that had eluded him.

Kipchoge ran a time of time of 2:01:39 on a sunny and warm autumn day along the flat inner-city course.

In October, Kipchoge was named the UN Person of the Year.

by the United Nations office in Nairobi

for his extraordinary performance,

his work on HIV-Aids in Kenya, and

his endurance and courage.

Later, Kipchoge was named the

Sports Personality of the Month for September 2018.

He got the accolade after setting a new marathon world record on September 16 in the Berlin Marathon.

He won his first individual world championship title in 2003 by winning the junior race at the IAAF World Cross Country Championships and setting a world junior record over 5,000m on the track.

At the age 18, he became the senior 5,000m world champion at the 2003 World Championships in Athletics with a championships record, then followed with an Olympic bronze for Kenya in 2004 and a bronze at the 2006 IAAF World Indoor Championships.

This marked the kind of greatness this man was going to bestow upon Kenyans in the years to come.

Kipchoge, 34, switched to road running in 2012 and made the second-fastest ever half marathon debut with 59:25 minutes.

On his marathon debut he won the 2013 Hamburg Marathon in a course record time.

His first victory at a World Marathon Major came at the Chicago Marathon in 2014.

Described as 'the greatest marathoner of the modern era',

Kipchoge has won 11 of the 12 marathons he has entered, his only loss being to Wilson Kipsang Kiprotich at the 2013 Berlin Marathon.

In 2016, Kipchoge won the marathon on 2 hours 3 minutes 5 seconds just 8 seconds off the world record held by Dennis Kimetto

In April, Kipchoge defied soaring temperatures to win the London Marathon for a third time, while Mo Farah finished in an impressive third place, breaking the British record in the process.

Kipchoge raced out of the start, with the leading group registering a blistering opening mile of four minutes 22 seconds, but the Kenyan could not maintain that pace as temperatures rose over 20 degrees Celsius.

Kipchoge was honoured as the IAAF male athlete of the year at athletics’ annual awards ceremony.

Colombian jumper Caterine Ibarguen was named the woman athlete of the year.

Kipchoge shattered the world marathon record by 78 seconds as he completed the Berlin Marathon in two hours, one minute and 39 seconds, while Ibarguen was the Diamond League champion in both the long jump and triple jump.

Votes by IAAF Council members counted for 50 per cent of the results with online public votes and ballots by the IAAF Family counting for 25 percent each.