Maraga, wife airlifted to Nairobi for treatment after Nakuru accident 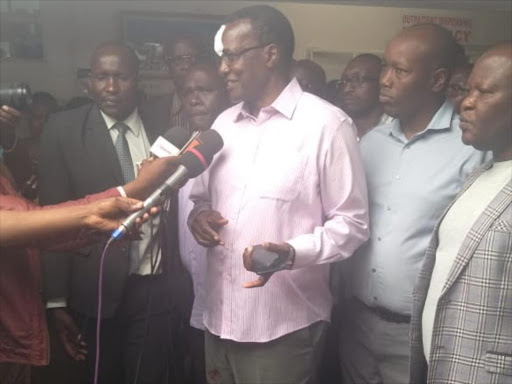 Chief Justice David Maraga and his wife were on Saturday

airlifted to Nairobi for further treatment.

The two were involved in

Maraga told a press conference that there was no cause for alarm for they were in a stable condition.

"We are in a stable condition hence no need for alarm. We will be airlifted to Nairobi Hospital for further medical check ups, " the CJ said.

is helped on her feet as she leaves War Memorial Hospital on Saturday, December 22, 2018. /RITA DAMARY

The Supreme Court president was travelling with his wife to church in Ngata when their car was hit at Miti Moja, police said.

Regional traffic commandant Ziro Arome said he sustained an injury to the head but was stable.

The CJ's Mercedez Benz was heading towards Nakuru town before it collided with the saloon car which police said joined the highway from a feeder road without giving way.

"The driver of the other car, Jonathan Kigen, was rushed to Valley Hospital Nakuru and admitted with head injury. Scene was visited and necessary action taken."