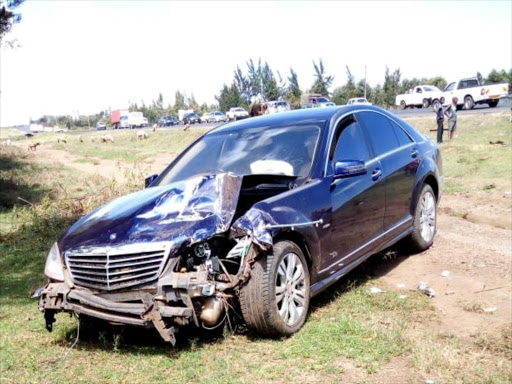 Chief Justice David Maraga's car after it was involved in an accident at Ngata, Nakuru on Saturday, December 22, 2018. /COURTESY

Chief Justice David Maraga and his wife were on Saturday rushed to War Memorial Hospital Nakuru after a head on collision accident.

The Supreme Court president was travelling with his wife to church in Ngata when their car was hit by another at Miti Moja, police said.

He said the vehicle, which hit the CJ's car head-on, was speeding. The accident occurred at about 10.45am.

A senior health administrator told the Star that plans were underway to fly the Chief Justice's wife to Nairobi for further treatment.

But the CJ, in a tweet, assured Kenyans that they were fine and were receiving treatment at the hospital.

"My wife and I were involved in an accident in Nakuru this morning on our way to Church. We are undergoing medical observation."

"My driver and aide who were with us are also okay. We thank God for His mercies. Thank you Kenyans for your prayers and concern," he said.

The Chief Justice had a busy day on Friday when the Supreme Court delivered key judgements for poll petitions.

Several MPs, save for Embakasi South's and Ugenya, retained their seats in the cases which emanated from the August 2017 general election.