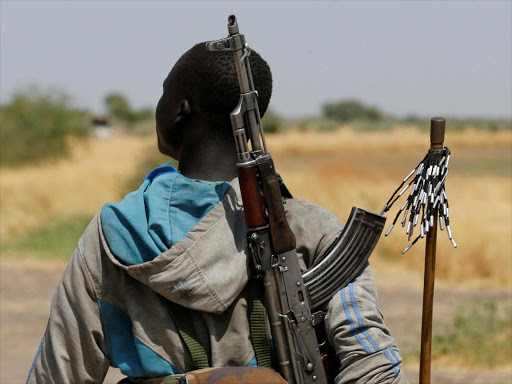 An armed man walks on a path close to the village of Nialdhiu, South Sudan February 7, 2017. /REUTERS

Kenya has called for investigations into an attack by South Sudanese security forces against Juba Monitoring and Verification Team.

In a press statement on Friday, Amb Kamau said the attack by South Sudanese forces on the Ceasefire and Transition Security Arrangements Monitoring and Verification Mechanism (CTSAMVM)

on Tuesday 'constitutes a grave affront on basic human rights'.

The Daily Nation on Friday reported that a Kenyan military officer, a Major Chemjor, was among the South Sudan peace monitors who were detained and tortured by security personnel.

During their detention, the Nation said, the CTSAMVM team was physically assaulted and abused by being blindfolded and handcuffed, kicked and stripped down of their clothing.

"The government of Kenya calls upon the government of South Sudan to thoroughly and expeditiously investigate the incident and bring the security personnel responsible to account," Kamau said.

He noted the attack “grossly undermines” efforts by Igad and the international community in bringing peace to South Sudan.

In a statement to media on Friday, Igad said the incident brings into question the commitment of South Sudanese government to ensure its forces understand and respect the [peace] agreement in spirit and in letter.

"Besides it sends a message to CTSAMVM members and other Permanent Ceasefire and Security monitoring institutions that their safety and security is at risk wherever they move," the statement read in part.

formally ending a five-year war that has killed tens of thousands.

peacekeeper from Bangladesh was killed when unidentified gunmen ambushed a humanitarian convoy on a road in South Sudan.