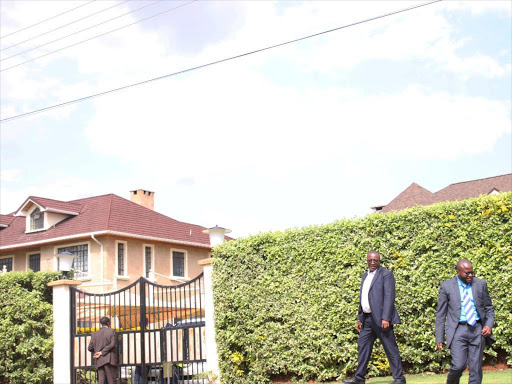 Meru senator Mithika Linturi and his wife Marianne Kitany met, fell in love and got married quietly in the corridors of power.

However, the lovebirds-turned-bitter enemies are headed for a nasty split after Kitany formally filed for divorce.

Kitany, a former powerful Chief of Staff at the Office of the Deputy President William Ruto wants their union dissolved for cruelty, neglect, infidelity and desertion.

According to the divorce papers filed at the Chief Magistrate's Court at Meru, the two were married in a customary marriage under Meru and Nandi customary law on 16th April 2006 at Kapchemosin village, Nandi County.

They thereafter on the 23rd to 26th December 2016 solemnized their union by way of customary marriage under Meru Customary law.

However, in the high-profile divorce suit, Kitany accuses Linturi of among other things failing to provide her with any or at all emotional support, love, affection and care.

He is also not buying Kitany and her children food.

Linturi has instead lost all family values and has transferred his love and affection from her to other women, Kitany says in the court documents supporting her divorce plea.

In divorce papers filed at the Chief Magistrate’s court at Meru, Kitany wants their marriage dissolved because it has “irretrievably broken down, untenable and unsustainable.”

In a certificate of urgency, Kitany’s is seeking preservation orders restraining Linturi of depriving her of property rights in their multi-million estate.

She wants the court to declare that she is entitled to 50% of the shares and assets held by Linturi in Atticon as provided by the Matrimonial properties Act, 2013.

Among the properties she wants preserved include listed matrimonial homes which are registered in Linturi’s name and or on his behalf are owned jointly with her or are held beneficially and in trust for her.

The properties include their palatial matrimonial Runda House at Mae Ridge Country Villas and another one at Maua, Meru.

Alternatively, she wants a declaration that the she is entitled to the very least, an equal share either in kind or cash to the proceeds of the sale/transfer of the said properties.

She argues that he properties set out above were acquired and developed by the joint efforts of Linturi and her during the course of their marriage.

“That our union consists of a blended marriage (consisting of children from previous unions) to which I and the Respondent entered into the marriage with three issues [children]each,” she says in her sworn affidavit.

According to Keitany, before they formalized their customary marriage, they cohabited as husband and wife on or around June 2014 and resided at her rented house in Kileleshwa.

They then agreed to purchase and develop their own matrimonial place by building on a piece of plot that they had purchased in Runda and put up a palatial home valued at Sh115 million.

She adds that they also agreed to develop another matrimonial place at Amwamba, Meru County by reconstructing the house and building new premises that would host our guests including his constituents and other political figureheads and leaders.

The Meru home cost Sh44 million, according to her.

Kitany admits that Linturi requested her to stop pursuing reinstatement or otherwise in government after her position as Chief of Staff was declared redundant in the office of the Deputy President.

She says they agreed to that so that she could concentrate on managing their matrimonial homes including their construction and development, the farms, supervision of the companies and related properties as the senator pursued his political career.

“That as our marriage prospered so did our fortunes increase,” she says.

“I stand to suffer irreparable harm and loss if I am evicted from our matrimonial homes to which I have developed the same at great expense and having established in the process a great emotional attachment for me and our children most particularly regarding our matrimonial homes and other assets acquired during dependency of our marriage,” she adds.

On Wednesday a group of youths stormed their Runda home and threatened to evict Keitany despite a court order barring any attempts to throw her out of the home.

The order dated October 21 also bars Linturi from sexually or physically abusing Keitany. He was also warned not to set foot at the Runda home except in the company of an officer to pick his belonging.

In court through her lawyers Kihang’a & company advocates, Keitany says Linturi has exhibited to and treated her with extreme cruelty and willful emotional, physical and psychological neglect.

In one of the high-profile divorce cases that would be closely watched, Keitany – an ex-aide to Deputy President William Ruto – accuses the politician of threatening to shoot her on several occasions at their matrimonial home.

“The respondent has totally abdicated all his responsibilities to his family as a husband and the respondent is a man of ungoverned temper, irresponsible behavior and outburst of rage. I have on several occasions made effort to reconcile our differences including inviting our family members, close relatives and friends to no avail,” avers Kitany in her affidavit.

To demonstrate the senator’s cruelty, Keitany says on several occasions, Linturi would snatch and smash her mobile phone in rage leaving thereby cutting off communication.

She says her husband has deserted the marriage and doesn’t care about her emotional and psychological needs.

Tabling evidence of Linturi’s infidelity, Keitany says in her papers that the senator has become exremely untrustworthy and lives a very secretive life which always caused great tension in the marriage and the family.

She accuses her husband of having illicit affairs with other women outside the wedlock as well as having another family elsewhere.

“I have now learnt he married sometimes early 2018 and is currently cohabiting with another woman,’ she says adding that she is currently on daily medication for depression and psychotherapy as a result.

She adds, “the respondent [Linturi] has been adulterous during the subsistence of the marriage and he has an issue [child] who is currently four years old with another woman born during our marriage.”

According to Keitany, Linturi has failed to show concern or empathy to her emotional needs for love and companionship and in effect denying the Petitioner his marital rights to companionship.

“The respondent [ Linturi] has denied the Petitioner her conjugal rights causing mental anguish and torture as well as humiliating the Petitioner,” says Keitany through her lawyer in the court suit.

In her material evidence before court, Keitany says Linturi is a habitual deserter of the matrimonial home and in fact did so on or about five times each ranging from about two weeks to six months.

“One notably I found him checked in and booked at 14 Riverside Drive, Dusit and another time at Safari Park hotel where he had stayed for close to two weeks. Most recently he has been gone for six months without informing me,” she says.

Further, Keitany says the senator is constantly communicating with other women including exchanging nudity, vulgar and pornographic images and videos thus causing her immense mental anguish.

“I had on several occasions been exposed to venereal diseases and STD’s of various kinds and when I confronted him to accompany me for treatment he threatened me with death,” she said.

and 4am in the morning and turned hostile and irrational when questioned even while she was aware that he was not at his place of work.