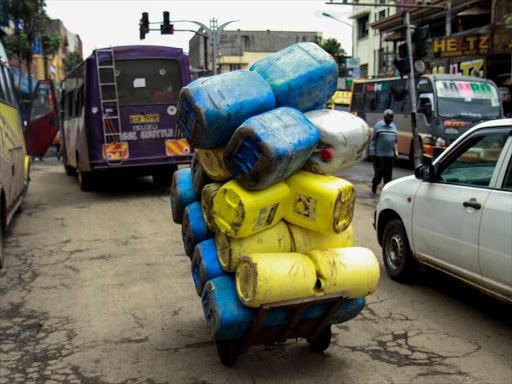 A man pushes moves about the Street of Nairobi with his Cart selling water. Nairobi County has been experiencing Water problem following the water rationing Initiative by Nairobi water./FILE

The Nairobi county officers have arrested 35 water vendors in Nairobi in the past seven days due to illegal water connections.

The crackdown carried out by the county and the Nairobi City Water and Sewerage Company target to end cases of water shortage in some city estates.

NCWSC director Nahashon Muguna said the operation was carried out in all the 17 sub-counties in the capital.

“We will sustain the war on water cartels and those who are diverting piped water for their own personal use. We will also disconnect the illegal connections and arrest those responsible,” said Muguna.

Most of those found diverting piped water have been arraigned and charged.

Muguna has further warned that car wash joints will no longer be allowed to operate along the roads since most of them have illegal connections.

“I’m appealing to all Nairobi residents to apply for water connection and avoid using the cartels to get water through diversion which denies other residents the commodity even after paying for the services,” added Muguna.

Early this month Governor Mike Sonko announced a Sh300,000 cash reward for anyone who will help the Nairobi City County Government identify those behind the water cartels, many of them accused of diverting the commodity to private vendors by disconnecting water pipes in Nairobi estates.

The Governor also offered a Sh10,000 cash reward for anyone who reports County officials who are colluding with the cartels to divert piped water for their own personal benefit.

“We are determined to identify and individuals behind the water cartels who divert piped water to private water vendors. It’s apparent that the water shortage being experienced in many parts of Nairobi is as a result of sabotage by these cartels whose days are now numbered. We will find them,” said the Governor.