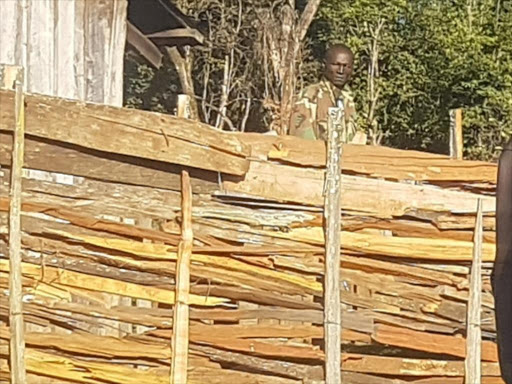 Governor Alex Tolgos of Elgeyo Marakwet was left in shock after a drunk forest guard cocked his gun and threatened to shoot him.

The guard was quickly wrestled to the ground and disarmed as he was aiming the gun at Tolgos and his entourage who were touring projects in Chebororwa ward.

The guard dressed in civilian clothes attempted to stop the governor from entering Takwei primary school arguing that it was located in a forest.

The school is located near the forest station where the forest guard is attached.

"If you go into the school I will get my gun and shoot you", said the guard as he hurled abuses at the governor and his team.

The guard then dashed to his house and returned in his jungle jacket, and armed with his G3 rifle while yelling.

He cocked aiming at the governor before his forest guard colleagues wrestled and disarmed him.

After the incident, Tolgos said the forest rangers should be moved out of the school compound with immediate effect.

"We can't allow this to happen... how can we have security officers living in a school compound and getting so drunk in such a way," said Tolgos.

He said he would deal with the matter officially with the Kenya Forest Service and the police.

The governor later went on with his tour of projects in the area.

Residents of the area accused the rangers of burning charcoal and engaging in illegal logging.

Takwei Primary school head teacher Stanley Rutto said cases of the officers firing in the air whenever drunk were common.

"As from 5 p.m every evening, we are treated to gunshots.We are almost accustomed to it," said Rutto.

Area assistant chief Joram Kipruto said the officer popularly known as Omwami in the area has also threatened him in the past.