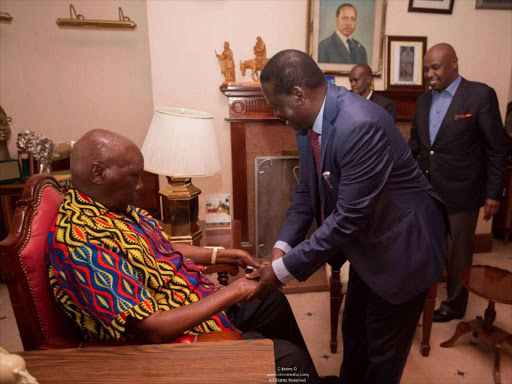 Former President Daniel Moi was on Monday evening discharged from Nairobi Hospital where he was admitted last Thursday for a medical check-up.

A statement from Moi's office said

doctors had examined and closely observed the former head of state during his admission.

mzee was treated for flu which he attributed to the prevailing chilly weather.

Silverstein said the former president was responding well to treatment but needed time to rest.

Moi's last public appearance was on October 26, 2017, when he cast his vote at the Kabarak University polling station during the repeat presidential election.

His health has occasionally given him a scare, which saw him flown to Tel Aviv, Israel for a knee operation in March.

Until the flu bout, Moi's health has been relatively impressive in the past months.

He even hosted several high profile visitors at his Kabarak home in Nakuru county.

Deputy President William Ruto's visit on May 14, however, flopped as it coincided with Moi's appointment with his doctor.

Post a comment
WATCH: The latest videos from the Star
by EMMANUEL WANJALA @ItsWanjala
News
17 December 2018 - 18:00
Read The E-Paper