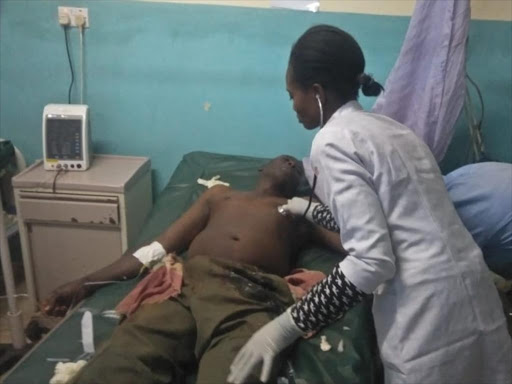 A nurse attends to one of the injured villagers at the Mt Elgon hospital on Sunday night, December 16, 2018. /CORAZON WAFULA

Several others, including the Trans Nzoia county assembly Speaker Joshua Werunga, were injured during the confrontation that erupted at around 4pm.

Werunga was hit on the head by a cartridge when he tried to calm the situation.

A witness who sought anonymity said the incident started after police officers arrested a man who had quarreled with his wife.

“Some two officers came to arrest the man who was at the market centre. They roughed him up and one of the officers threatened to shoot him. That’s when villagers came to his rescue," he said.

The witness said the officers called for backup after residents became more violent.

"The officers were shooting randomly," he said.

Werunga was caught in the ensuing melee and sustained serious head injuries.

Addressing the public at the Kitale county hospital, the county Speaker faulted police officers for fueling the situation.

“After I got the reports of the clash I decided to go to the ground. I called the area OCPD and he was aware.”

“At the ground, the situation was bad and I tried to ask the officers to stop shooting but then I was hit on the head,” Werunga said.

County Commander Erustus Mbui asked residents to be calm as investigations get underway.

He said the Speaker’s condition had been controlled although he was referred for further analysis at Mediheal hospital in Eldoret.

“He had a lot of bleeding on the head but we have contained it," he said.

Trans Nzoia county Governor Patrick Khaemba and several MCAs were among those who arrived at the hospital to condole with the families.

By the time of publishing this article, the police were yet to confirm the number of the dead.