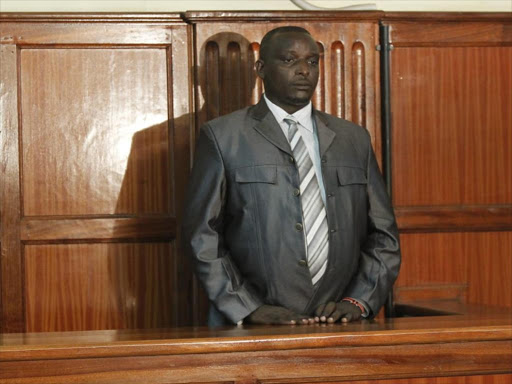 Former OCS Ruaraka Nahashon Mutua who has been convicted of the murder of an inmate five years ago. December 13,2018./ MONICA MWANGI

Nahashon Mutua has been convicted for the murder of an inmate five years ago.

"It was in the interest of accused to flout the law so as to cover up what he did," the judge said on Thursday

She dismissed Mutua's defence that the deceased- Martin Koome was assaulted in the cells by fellow cellmates.

"Prosecution has proved its case beyond reasonable doubt and I believe that the death was caused by the injuries in which he sustained while at Ruaraka station," she said.

Mutua had denied killing Koome in a police cell on December 19, 2013.

He told the court that Koome was beaten up by cellmates for noise making minutes after he was booked.

The judge found the officer with a case to answer after analysing evidence adduced by 18 prosecution witnesses.