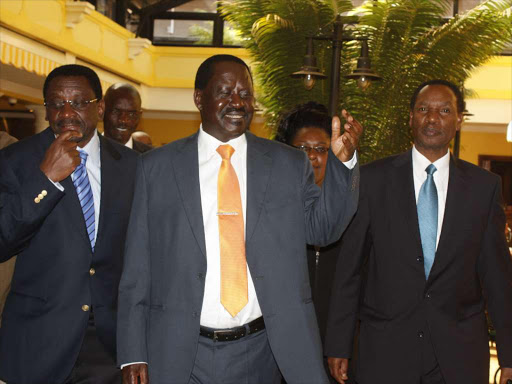 The silent tension between ODM leader Raila Odinga and Siaya Senator James Orengo has been reignited ahead of President Uhuru Kenyatta’s visit to Kisumu.

Only a day after Raila camped in the lake city to rally local leaders and residents to welcome the Head of State, Orengo came up with an ultimatum to Kenyatta.

The senator, viewed by many as Raila’s closest ally and legal adviser, demanded that Kenyatta compensates victims of the 2017 post election chaos.

Scores of people were killed countrywide, including Kisumu, by brutal police officers.

Uhuru is expected in Kisumu on Thursday for the first time since the March 9 handshake to preside over the launch of universal health coverage pilot phase.

Orengo’s demands rekindled the unspoken, but vicious battle between him and his party leader, over what is viewed as the control of Nyanza politics and the 2022 elections.

His latest remarks are viewed by pro-Raila MPs as efforts to scuttle the truce between the NASA leader and the President after the highly contested August 8 general elections.

ODM MPs have accused Orengo of opposing the handshake and leading campaigns to sabotage its success.

Raila on Friday held a rally in Kisumu and urged the residents and leaders to welcome his erstwhile political nemesis with joy because he will come with "good things".

“When the President is coming, you don't have to give conditions to someone who is visiting on serious issues of development. I am not downplaying the significance of 2017 victims of election violence, but I think we have a different forum to address the issue,” he said.

Nyando MP Jared Okello said by issuing demands to either Kenyatta or Raila, on their first joint event to the region ,amounts to sabotage of the Building Bridges Initiative and agenda of healing the nation.

“When people have shaken hands and said enough is enough, let’s bury the hatchet and they have crossed that bridge, you don't always say that you know we have greeted each other but you killed my people. It negates the very purpose of shaking hands,” he said.

Sources within the orange party have told the Star Orengo has been working round the clock to sabotage the handshake after he was left out of the team that worked behind the scenes to deliver the truce.

"He began by mobilising opinion leaders from the Nyanza region against the handshake, but it failed. In September, Orengo mobilised a team of ODM MPs, mostly lawyers, to oppose the VAT Bill that proposed a 16 tax on petroleum products. That also failed, the source said.

A Jubilee party source said senior party officials have advised Raila to have a meeting with Orengo and iron out their difference because Orengo's scheme could create a problem for the handshake.

The move was in defiance of Raila. The ODM leader had whipped his MPs to support the bill. The bill was later passed after the President dropped the tax to eight per cent.

“He failed and retreated. He then started a campaign that Raila must be on the ballot in 2022 even as Raila was warning against early campaigns and appealing for focus on Building Bridges Initiative,” the source said.

The senator is believed to be positioning himself to succeed Raila, who has been an unchallenged leader in Nyanza politics for nearly 30 years.

Others believe Orengo, a renowned lawyer who led a team of advocates in the NASA presidential petition that saw Supreme Court nullify Uhuru’s win, is also seen a man who wants to portray himself as Raila’s defender so he can land the Siaya Governor job with ease.

But he is opposed to Raila’s succession plan which revolves around a crop of young loyalist leaders — Mombasa Governor Hassan Joho, Mbadi and Junet Mohammed, the MP for Suna East in Migori County.

Nominated Senator Rose Nyamunga said there is no harm in Orengo’s call to the President to talk about the post election victims.

“I think that the handshake should mean more than what we are seeing. In my view, it was also meant to bring some healing. It is meant to heal a country,” she said.

“The people who lost their lives last year is something that is very fresh that I would also concur with Senator Orengo. It would be good to hear something from him concerning this issue,” she added.

Rarienda MP Otiende Amolo said that it will be prudent for the government to move in and compensate the election victims on its own volition rather wait for a Court to compel it to do so.