Theresa May to address Commons after botched vote on Brexit deal 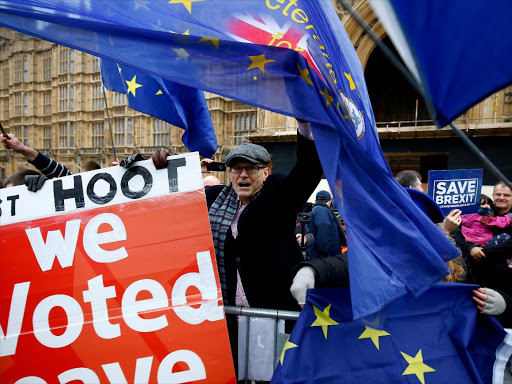 Pro and anti-Brexit demonstrators wave flags and placards outside the Houses of Parliament in London, Britain, December 10, 2018. /REUTERS

Theresa May says she has called off Tuesday's crucial vote on her Brexit deal because it would be "would be rejected by a significant margin".

She said MPs backed much of the deal she has struck with the EU but there was concern over the Northern Irish backstop.

But she said she believed she could still get the deal through if she addressed their concerns.

And that, she added, was what she intended to do in the next few days.

The pound fell sharply in response to the reports earlier of a likely delay, shedding 0.5% versus the US dollar to stand at $1.26, an 18-month low. The pound was 0.8% down against the euro.

May's Commons statement will be followed by a statement from Commons leader Andrea Leadsom - and then a statement from the Brexit secretary Stephen Barclay on Article 50 - the legal mechanism taking the UK out of the EU on 29 March.

However, amid uncertainty about the official procedure for calling off the vote, the BBC's Laura Kuenssberg said it was not impossible Labour could join forces with Tory Brexiteers to try and make it go ahead.

DUP deputy leader Nigel Dodds said the situation was "quite frankly a bit of a shambles" and the PM was paying the price for crossing her "red lines" when it came to Northern Ireland.

Theresa May's deal has been agreed with the EU - but it needs to be backed by the UK Parliament if it is to become law ahead of the UK's departure.

May is thought to be trying to convince MPs to back her deal by suggesting the Northern Ireland backstop - the main item they object to - could be modified.

DUP leader Arlene Foster said she had told the prime minister in a phone call that the "backstop must go".

May has also been speaking to EU leaders about re-opening the withdrawal agreement, something both sides have previously ruled out.

It comes as the European Court of Justice ruled the UK could cancel Brexit without the permission of the other 27 EU members.

But European Commission spokeswoman Mina Andreeva said the EU would not renegotiate the Withdrawal Agreement.

"As President Juncker said, this deal is the best and only deal possible," she said.

"We will not renegotiate - our position has therefore not changed and as far as we are concerned the United Kingdom is leaving the European Union on 29 March, 2019."

The BBC's Brussels reporter Adam Fleming said Mrs May was "trying get more legal oomph behind the language" in the withdrawal agreement about the EU using "best endeavours" to get a trade deal which would remove the need for the backstop to be used.

Dozens of Conservative MPs had been planning to join forces with Labour, the SNP, the Lib Dems, Plaid Cymru and the DUP to vote down May's deal.

The Tory rebels and the DUP do not like the Northern Ireland "backstop", a legally-binding proposal for a customs arrangement with the EU, which would come into force if the two sides' cannot agree a future relationship which avoids the return of a visible Northern Ireland border.

Tory MPs say it is unacceptable because it would result in new regulatory barriers between Northern Ireland and the rest of the UK and could continue indefinitely, because the UK would not be able to leave without the EU's approval.

Labour leader Jeremy Corbyn, who was hoping to use a defeat for May on Tuesday to force a general election, said: "The government has decided Theresa May's Brexit deal is so disastrous that it has taken the desperate step of delaying its own vote at the eleventh hour."

He said the prime minister should have "have gone back to Brussels to renegotiate or called an election" when it became clear she would not get her deal through Parliament.

"We don't have a functioning government," he added.

Labour MP Chris Leslie suggested his party could table a no-confidence motion in the prime minister on Tuesday.

SNP leader and Scotland's First Minister Nicola Sturgeon tweeted to Jeremy Corbyn: "If Labour, as official opposition, lodges motion of no confidence in this incompetent government tomorrow, @theSNP will support & we can then work together to give people the chance to stop Brexit in another vote. This shambles can't go on - so how about it?"

But Tory MP Nigel Evans said the prime minister had taken a "wise decision" as the outcome of the vote would have been a "humiliation" for her. He said she still had the necessary authority to re-negotiate the deal.

Conservative Brexiteer Peter Bone said Tory MPs would back May in a confidence vote - as would the Democratic Unionist Party, which is against her deal but is committed to keeping her in power.

Bone said "every day that goes by" takes the UK closer to leaving the EU on World Trade Organization terms, without a deal - something he backs.

But he added: "Maybe there is a chance to renegotiate and I hope she will."

But Irish Prime Minister Leo Varadkar said it was not possible to renegotiate the Irish border backstop proposal without "opening up all aspects" of the Brexit withdrawal agreement.

"PM said there definitely won't be a People's Vote. Get ready People's Vote, taking this matter back to the people is the only way out of this Brexit chaos."