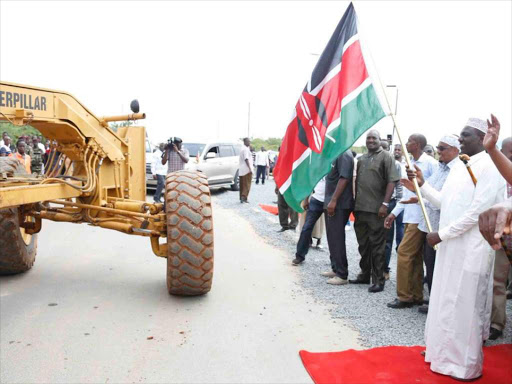 Deputy President William Ruto launches the construction of the 20km Dekabury and Garissa Ndogo-Sankuri link roads at a cost of Sh480m in Garissa, December 10, 2018. /DPPS

Deputy President William Ruto has said the Ministry of Education is on top of things in resolving a standoff on the admission of students to teachers training colleges.

Ruto was responding to Northeastern leaders' request to have students from the region join colleges with lower grades because the region is marginalised.

They said the move was a temporary one to avert education crisis in the region due to insecurity challenges teachers from other regions experience.

Ruto said, "About the problem you have with the Teachers Service Commission, I want to assure you that it will be resolved."

The Deputy President spoke in Garissa town after launching a water project that included the drilling, equipping and pipeline distribution of borehole water in Garissa town.

The DP said the Government asked Northeastern leaders to mobilise students to take up teaching jobs to bridge the gap.

"I want to give you our assurance that the education of our children, especially those from the pastoral communities, is a priority commitment for the Government," he said.

At the same time, Ruto told Kenyans the 2019 national census will be conducted in a transparent manner.

The DP said the census is important

because it will guide the Government in the management of the country.

"We want every Kenyan to get their fair share during the census so that we can plan the country’s development on the basis of data that is correct. The relevant agency will involve all stakeholders," the DP said.

Ruto asked youths from pastoral communities to enrol in technical training institutes to acquire skills that will make them competitive in the job market.

"Our goal is to ensure every youth has access to employment opportunities," he said.

Mandera senator Mohamed Mohamud said education is the single most important thing a nation can give its citizens.

The DP said the Government has set aside Sh625 million for Garissa town water project.

He said leaders had resolved to unite and serve Kenyans.