Uganda party cruise tragedy: ‘Too drunk to balance the boat’ 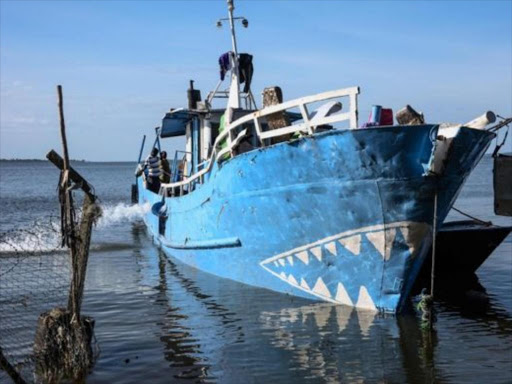 The MV Templar was recognisable because of the shark mouth painted on the bow. /AGENCIES

Six survivors of a day of fun and revelry that turned into a tragedy after a Ugandan party boat capsized on Lake Victoria tell the BBC's Catherine Byaruhanga what happened.

"The DJ kept irritating us, telling us to balance the boat," says Tashobya Nsubuga.

"A good song would start playing and then you would hear, 'Balance the boat'. That was a red flag already," she says about the moment she knew something was not right on the boat, which capsized 200m (656ft) from the shore a fortnight ago.

The mother of three was lucky to make it out of Lake Victoria alive together with her younger sister.

But many families have been left broken with more than 30 people confirmed dead following the boat disaster.

Ms Nsubuga and her sister Esther Batahi recently met up with four other friends and survivors - Prince Arnold Simbwa, Brian Jjuuko, Sharifah Mbatudde and Francis Ssenkezi - at a hotel in the Ugandan capital, Kampala.

In search of comfort, understanding and camaraderie, they have found themselves gravitating towards each other in the days after the accident.

One thing they all remember is that they were having a great party.

On board the boat, known as the MV Templar name after one of its owners Templar Bisaase, was an elite circle of people mostly from the Buganda Kingdom of central Uganda.

"There were three groups of people: one was a group of guys from the Buganda Kingdom, the other group was traders, then there was a group of royals," says Jjuuko, a 30-year old marketing manager, who received his invite personally from Prince David Wasajja, the younger brother of the King of Buganda.

Ms Mbatudde, a young businesswoman who sells jewellery from China, was excited to get her invite from a friend who knew she loved boats.

On the day, the excitement about the party and taking a boat trip masked the signs that things were not right.

The revellers had a relatively early start for a party. They were told they would depart on the MV Templar from Kampala's KK Beach at 11:00 local time (08:00 GMT), sail 12km (7.5 miles) to the K Palm Beach resort and then return to the capital by the evening.

But the boat was late and by mid-afternoon guests began to wonder if it was ever going to turn up.

A call was made to its owner, according to Jjuuko.

"We decided to call Templar, he said he was fixing another engine on the boat. He said, 'It would take about 30 minutes.'"

But this did not put people off and the party was already in full swing at KK Beach.

Whiskies and cream liqueurs were served by the bottle and platters of food kept on coming. All of it was free.

Some talked of pulling out of the trip or hiring different boats instead, but when the MV Templar finally showed up five-and-a-half hours late everyone cheered.

It was a thrilling moment Ms Mbatudde tells me: "We were excited. People were shouting, 'Let's go, let's go!'"

And the revelry notched up a level once everyone had boarded.

No-one knows exactly how many people got on the boat as a manifest was never completed. But Ssenkezi remembers one of the organisers saying they had planned for 90 guests.

Pictures and videos being shared on social media as trip got underway show that people were having a good time.

Ms Mbatudde was sitting towards the front of the boat along with most of the younger guests and remembers a "hyped" atmosphere.

With the older partygoers at the back, Ms Nsubuga says: "We were seated, looking at revellers, eating. Everyone was happy."

The survivors all burst out laughing when Ssenkezi jokingly asks the group, "So where was I on the boat?"

"You were everywhere! He was all over the place. He mixes with everyone," Jjuuko responds.

Ssenkezi acknowledges that "it was a great party".

The DJ's shouts for the revellers to "balance the boat" not only irritated some, but also turned into a rhythmic chant that accompanied the music.

The problem was that many did not know exactly where to go to balance it or were too drunk to pay attention to the instructions.

And the signs that all was not well kept coming.

Ms Nsubuga and Ms Batahi noticed their bags on the floor were getting wet as the boat started to take on water.

Two young men were seen frantically trying to fix the engines, which had stalled twice. The music then stopped and the lights went off.

But even though it was approaching dusk there was no major sign of panic and, the survivors say, the MV Templar was known to be old and prone to breaking down. They assumed they would get to their destination.

It was 19:40 and dark when Ms Mbatudde last looked at her phone when two men asked her to keep it on so they could see what they were doing as they tried to bail water out the boat.

Jjuuko recalls the boat then having to make an emergency turn towards land when the helmsman shouted that they would not make it to K Palm Resort.

He believes this is when the boat took on the majority of the water as the door leading on to the deck was open and the waves were getting more "ferocious".

Mbatudde received a call but ignored it. "Immediately after I put my phone in my bag, that's when the [boat] fell in the water."

"Boof!" is the sound Jjuuko remembers when it tipped over. They all say it took seconds for the boat turn on its side.

In the moments before the boat capsized Ms Nsubuga says she was preparing for what she imagined was going to be a safe landing.

"There was a brand new bottle of [whiskey] in a box. I was like, 'We shall need this later.' Not in my wildest imagination did I think this boat was going down.

"I knew if we went down maybe the boat would tilt, we would fall out and it [would] stabilise and then we [would] scamper back on. So I put the bottle under my armpit and a pack of food."And then we actually went down, down like down. And that's when the survival instinct kicked in," Ms Nsubuga says.

Prince Arnold, nephew to the King of Buganda, admits that he felt too drunk to swim, "I made up my mind I was not going to swim."

He held on to the boat's side rail, but his head was submerged.

"I could come up for breath. When I came back up the third time, the noises had reduced. People had started dying.

"Now the fourth time I was struggling to stay up but I could see the bodies. I could see people dying.

"Then I had a guy on my leg, I said, 'If I kick this guy I will never forgive myself.' But I knew he was going to die.

"At that point in time you are that selfish. At some point I felt him going, he went with my shoe," he says, going quiet and turning his gaze downwards.

He was saved by a fisherman.

None of the survivors I meet were wearing a life jacket, though they could all swim.

Jjuuko was initially trapped in the boat; his friend Irene, who could not swim but wore a life jacket, was in there with him.

"I went down with her and brought her up. The only good thing she did was she didn't fight. We come out and there is panic, guys are yelling. People started praying. Muslims, Catholics, 'Mother Mary', all religions.

"There's a guy who confessed that he had a child his wife didn't know about."

Prince Arnold, Ms Nsubuga, her sister Ms Batahi, Ms Mbatudde and Mr Ssenkezi all made it to shore thanks to some fishermen, who came to their rescue.

Jjuuko decided to swim to shore when he saw one of the fishing canoes capsize after too many people tried to clamber on board. One of the fishermen, John Owecho, drowned as a result.