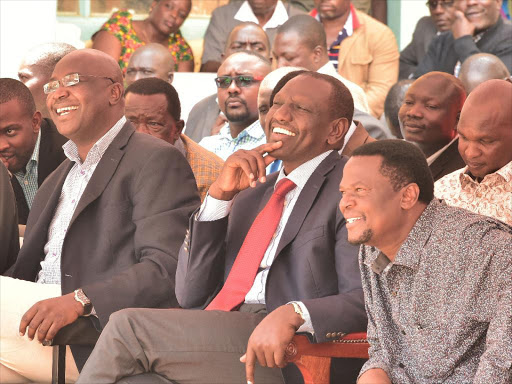 Deputy President William Ruto has told off those criticing him for allegedly campaigning for 2022 presidency to stop panicking.

Ruto said his most criticized crisscrossing the country was part of his mandate as the Deputy President.

“People should stop panicking about my traversing the country saying it is 2022 campaigns, I'm yet to start my campaigns because when I start they will be in for a rude shock,” he said.

He was speaking during a church service at Catholic Christ the King in Bungoma on Sunday.

Ruto said only God knows about 2022 and people should stop talking about it.

"Am asking my fellow Kenyans to stop panicking about Kenyan politics as is only God who plans for tomorrow and not any human being,'' he said.

He said elected leaders have debts to their electorates which they need to fulfil and asked them to unite and deliver regardless of their political parties.

"We should unite and change the livelihood of our people and not to politic all the time," he noted.

He said the Jubilee administration was keen on implementing the big 4 agenda by ensuring that they construct 3000 houses in Bungoma alone.

Bungoma Governor Wycliffe Wangamati said he was ready to work with the Deputy President in his 2022 presidential bid.

He, however, said the rules of engagement should be structured to ensure that the entire Bungoma county supports Ruto.

Ruto gave a contribution of Sh 2 million and another Sh1 million from president Uhuru Kenyatta.

Post a comment
WATCH: The latest videos from the Star
by JOHN NALIANYA @jonaliash
News
09 December 2018 - 15:00
Read The E-Paper