Is a cure for HIV in the pipeline? 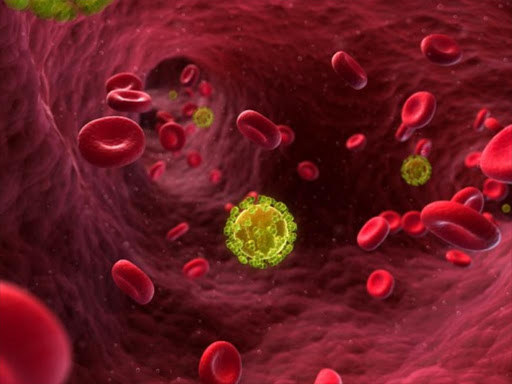 HIV virus in the bloodstream

Hope has been raised for millions of patients battling HIV as researchers now believe a cure could be in the pipeline.

Currently, the virus can hide away at 'undetectable' levels and can avoid being killed off - meaning a patient can never be considered cured.

But researchers at the University of Illinois believe they may have moved one step closer to completely ridding patients of the virus.

They claim targeting a gene inside the brain could flush the virus out of hiding and leave it vulnerable to the immune system and drugs.

Charities today welcomed the findings, describing the results as 'promising'.

Medical advances over the past four decades mean patients with the virus can have unprotected sex without fear of passing it on.

But the ultimate goal of discovering a cure for HIV, estimated to strike 37million people worldwide, has so far eluded scientists.

Even in patients deemed to have an 'undetectable' count of the virus, there are still traces of HIV effectively sleeping inside their bodies.

These are called latent viruses and don't cause illness but cannot be destroyed by the immune system or medicines, making HIV impossible to get rid of.

But when these latent viruses come to life and try to attack the body, they come out of hiding and the immune system and drugs can target them directly.

The researchers, led by Professor Jie Liang, claim hijacking the gene which brings HIV out of hiding – called Tat - could expose the virus to the immune system.

This could also allow antiretroviral drugs to attack the dormant virus by forcing it out into the open, in a method known as 'shock and kill'.

'It is extremely difficult to flush latently-infected cells out of their latency,' Professor Liang, a biomedical engineer, said.

The study authors even call it the 'the major obstacle for [the] eradication of HIV infection'. No existing drugs target the Tat gene circuit.

Shock and kill treatments have been trialled on HIV patients using cancer drugs called HDAC inhibitors, such as vorinostat and panobinostat.

However, they have 'so far failed to reduce the latent reservoir', the authors wrote in their study, published in the journal PNAS.

The researchers, based at the university's Chicago branch, explored how to make HIV hiding inside cells visible to the immune system.

Using a computer model, the researchers studied the Tat gene under different conditions.

'By targeting the Tat gene circuit with drugs or small molecules to activate it, we would be able to cause latently-infected cells to start producing more virus, and then they can be destroyed by the immune system,' Professor Liang said.

'And our results suggest new ways of targeting latent cells that may lead to the eradication of the HIV virus from a host.'

The viruses' replication is controlled by a gene called Tat, which hijacks the cell's machinery and causes copies of HIV to be churned out.

The immune system naturally fights this process but only when Tat is 'turned on' and the virus is actively replicating. When the gene is 'turned off', HIV lies dormant in the cell.

The Tat gene has a random chance of being active or inactive at any time and can switch from one to the other spontaneously.

A spokesperson for the National AIDS Trust said developments in cure research are always exciting and welcome.

The Terrence Higgins Trust said: 'The findings of this new research are promising and it's great to see a new mechanism for eradicating HIV being investigated.

'But it's important to emphasise that this is very preliminary modelling which still hasn't made it to the lab.

'So while we hope the results will help us move towards finding a cure in years to come, that won't be for a long while.'

Left untreated, this leads to AIDS – the collective name for a series of deadly infections which the weakened immune system cannot tackle.

Figures estimate around 101,600 people are living with the infection in the UK, while the toll is closer to the 1.1million mark in the US.

But in both countries, around one in seven HIV-positive people are thought to be undiagnosed.

It comes after official figures in September revealed the number of new cases of HIV diagnosed in the UK have fallen to their lowest levels since 2000.