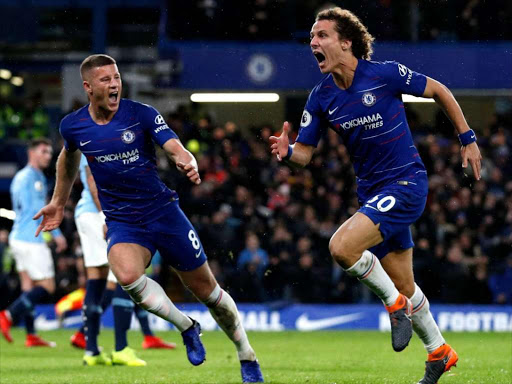 The Premier League may feel a different place on Sunday morning for some of the rivals of Manchester City, no longer unbeaten, no longer even top of the table and the aura of Pep Guardiola as the untouchable general of an implacable force a little less forbidding than it once was.

The champions beaten at last, 16 games in and Christmas’ punishing schedule on its way, Guardiola on the touchline wagging a finger at the fourth official over the details of a defeat that never seemed possible in the game’s opening stages. Maurizio Sarri scored his first career victory over his friend Guardiola with an unusual, spirited Chelsea performance that was sealed when David Luiz’s fine second-half header gave them a two-goal lead.

They had been ground down in the first half, worked back on to the ropes by City and strung out in defence until from nowhere a breakaway made the opening for N’Golo Kante to score a goal just before half-time. There was plenty of time for City to come back into the game but they found themselves up against a side that knows how to defend a lead.

In beating Chelsea, Sarri sacrificed the threat of Eden Hazard in the wide areas to play him in a central position where he picked up two assists. After defeat to Wolverhampton Wanderers on Wednesday this was a glittering prize for the Stamford Bridge coach who has reinvigorated his team in spectacular fashion.

Liverpool are top of the league by a single point and now, after victory over Bournemouth, are the only undefeated team left in the Premier League. Their meeting with City at the Etihad on Jan 3 is shaping up to be an epic. If Guardiola’s Amazon Prime hagiography told us anything then it is that his team’s reaction to defeat that interests him the most.

Sometimes it just needs one determined thrust as well as getting a few numbers into the opposition area to make the difference and so it was that Chelsea went in at half-time with an improbable lead in a game that had been dictated to them, not by them.

The goal from Kante with a minute of regulation time to come was an unexpected outcome given how few times the home team had been able to get on the ball in dangerous areas. The goal was not even that well finessed – along the way a poor touch from Willian, a bit of indecision from Marcos Alonso but when Hazard got on the ball time seemed to slow down. City’s defenders were wary of the Belgian and he alone could see the run of Kante, unmarked in the box, to score.

It was a hell of a way for Sarri’s team to end the half. They had been ceding possession and territory throughout, chiefly because of Hazard’s unwillingness to lead the press against John Stones and Aymeric Laporte when they were in possession. Chelsea’s main man, had been selected in a false nine position ahead of Olivier Giroud on the bench and Alvaro Morata, who was not even in the squad. A high-risk strategy from Sarri because the roots of Hazard’s serious fallout with Antonio Conte last season began when the ex-Chelsea manager picked his No 10 in the same position at the Etihad in March.

It does not look like Hazard has changed his mind about playing there, with the sort of half-hearted attempts to shut down Stones that looked suspiciously like a protest. Sarri flapped his arms a bit and looked exasperated but it made no difference to his star player.

The home team hung on but it was not much fun for them, especially on their left flank when Alonso gave the ball away too often and struggled to keep Raheem Sterling under control.

There was no place for Gabriel Jesus in this team, whatever blandishments Guardiola might have heaped upon his mediocre performance at Vicarage Road on Tuesday. This was a game for the best players at the City manager’s disposal and even without Sergio Aguero, Jesus is not one of them.

For the most part Chelsea were trapped in their own half. A team forced to park the bus when Sarri is anything but that kind of manager. Eventually, with half-time coming they broke free and Luiz struck an extravagant cross-field ball from left to right where Pedro was on the move. From there it went to Willian, Alonso and eventually to Hazard who did well to pick out Kante. He had joined this rare attack and was the man in just the right place to give his team the lead.

A different start to the second half when Chelsea seemed stirred by the lead and whatever had been conveyed at half-time by Sarri, and they had a couple of chances that might have led to a second.

Willian’s trickery drew a free-kick from Fernandinho running laterally across the box and goalkeeper Ederson subsequently had to stretch to save the Brazilian’s set-piece.

With 20 minutes left and Chelsea, having given up all pretence of pressing the City back line, the home side were settling in for the siege. Sarri gradually changed his team’s shape with Ross Barkley on for Mateo Kovacic and later Ruben Loftus-Cheek on for Willian. It was a show of faith in the 22-year-old that when he came on for the closing stages Chelsea were fighting to hold on to their victory.

Sarri wanted them to go forward and they adopted a more conventional 4-2-3-1 system with Barkley and Loftus-Cheek in the wide positions and Hazard alone up front.

They were rewarded with a second goal when Barkley won a corner that Ederson might have prevented from going out of touch.

Guardiola seemed to think the corner should never have been given. Before Hazard took it, Luiz worked his way to the front post and outjumped everyone to direct his header back past Ederson, putting the finishing touch on what was a pretty remarkable win.