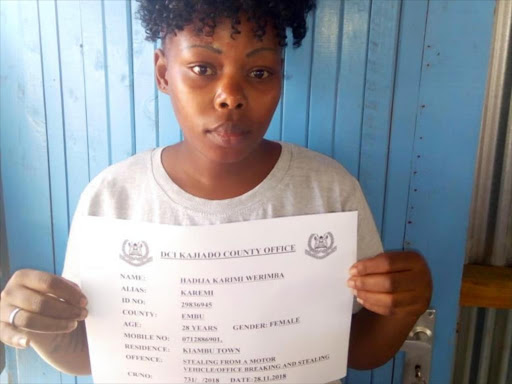 One of the suspects Hadija Karimi./COURTESY

Four people have been arrested for

waylaying people coming from banks and robbing them in Kajiado county.

"These people rob the public of their hard earned cash and other valuables," DCI boss George Kinoti said on Thursday evening.

Kinoti asked Kenyans to make a report at their nearest police station if any of the named persons have robbed them in the past.

"Look at them keenly. If you’re a victim, kindly make a report," he added.

Last month, two women were arrested in Thika for

drugging unsuspecting victims before robbing them of their valuables.

Post a comment
WATCH: The latest videos from the Star
by NANCY AGUTU @nancyagutu
News
07 December 2018 - 06:00
Read The E-Paper