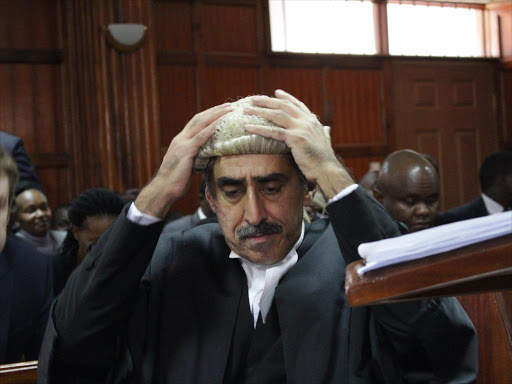 Secretary of Public Prosecutions Dorcas Oduor yesterday said both Orengo and Omogeni sit in the Legal, Justice and Human Rights committee of the Senate that often grills DPP’s office over accountability.

Oduor said allowing the two senators to represent Mwilu will be a potential conflict of interest.

Oduor said Orengo has senatorial privilege to access information regarding the pleadings in court which he might use against prosecutors.

“Where do we draw the line between him as a senator who oversights the DPP and a lawyer appearing for a party in this pleadings. There's a conflict of interest and that matter has to be dealt with,” Oduor said.

"It is only right that the two be disqualified from handling the matter."

The application for disqualification was made after Orengo opposed the hiring of Queen's Counsel Khawar Qureshi to prosecute Mwilu's case.

The lawyers engaged in a three-hour standoff with each side refusing to give in.

He said the UK lawyer cannot represent the DPP in the case until the gazette notice that appointed him is reviewed.

Oduor said Haji has a right to appoint a lawyer of his choice. She said Attorney General Paul Kihara directed the DPP can admit someone as an advocate as long as the registrars fee is paid.

Oduor said the fee had been paid and that she was not ready to proceed with the case if Qureshi does not lead the prosecution team.

“Our office has a right to be represented by anyone of our choice. We will not tolerate any further delay in this case,” Oduor said.

Oduor said she was disappointed that Orengo has raised "misconceived objections" to the appearance of an independent Queens’s Counsel, who is also a deputy judge of the High Court of England and Wales.

Qureshi is also a professor of law at Cambridge University. Orengo said Qureshi did not have a valid certificate of admission to practice in Kenya.

The Siaya senator said a letter written by the office of the Attorney General to the DPP confirming that Qureshi has been admitted to practice as an advocate in Kenya is not sufficient.

“Even for Kenyan lawyers, no one can just come into court and say he's a professor. The learned professor doesn't appear in court in strength of those letters,” Orengo said.

He cited a case in which the AG through Solicitor General Njee Muturi was barred from prosecuting a case in London.

The court directed all the objections raised by all parties be formally filed and be heard on January 14.

Mwilu moved to the High court and obtained orders stopping he prosecution over alleged corruption. The DCJ has on numerous occasions claimed that the criminal charges sought to be pursued by the DPP arise out of three commercial lending transactions in the course of normal banking relations between her and the Imperial bank of Kenya and there are other remedies to it other than her prosecution.

Post a comment
WATCH: The latest videos from the Star
by SUSAN MUHINDI @TheStarKenya
News
07 December 2018 - 00:15
Read The E-Paper