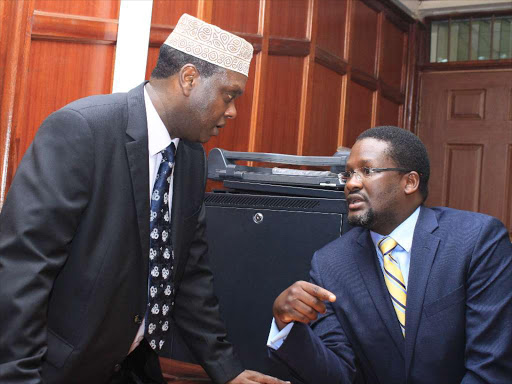 The pre-trial conference for the Rio scandal yesterday failed to take place after suspects complained that they had yet to get all documents to be used against them.

Chief magistrate Douglas Ogoti criticised failure by the Directorate of Criminal Investigations and the office of the Director of Public Prosecutions to fully disclose documentary evidence.

He said the trial could be delayed without full disclosure and the judiciary might wrongly be blamed for it.

Ambassador Hassan Wario (Austria), a former Sports CS, and three others were charged with graft and abuse of office arising from the Sh55 million lost during the Rio Olympics in 2016. The others are Haron Komen, a former director of administration in the ministry, former finance officer Patrick Nkabu and former NOCK secretary general FK Paul.

They are facing six counts of abuse of office and four others of wilful failure to comply with the law relating to the management of public funds. They are accused of unlawfully authorising payments in excess of Sh15,907,500 as allowances to members of the Kenyan team.

They are also accused of embezzlement of Sh22.5 million, Sh16.8 million in underutilised air tickets, Sh15.9 million in overpaid allowances and Sh6.5 million expenditure on unauthorised persons. They denied the charges and are out on bond.

Yesterday, lawyers representing the suspects said they had not received some witness statements and other documents, including an audit report.

Ongoti summoned the detective investigating the matter, chief inspector Mike Muia, to appear before him on January 22 next year, when the new pre-trial conference will be held.

“When someone changes the rules of the game and says they have disclosed when they haven’t, we’ll cite them for contempt,” he said.

The case cannot be heard until the defence lawyers are supplied with the documents.

Ongoti ordered the DPP and the DCI to prepare an inventory, citing all the witnesses and items to be used. He also ordered that every document to be supplied be cited in the inventory.

“Even if a voucher has 10 documents, cite them. If there are documents that the prosecution is not able to disclose at the pre-trial, such documents must be listed very clearly,” Ongoti said.

Post a comment
WATCH: The latest videos from the Star
by JOSEPH NDUNDA @Joseph_Ndunda
News
07 December 2018 - 00:15
Read The E-Paper