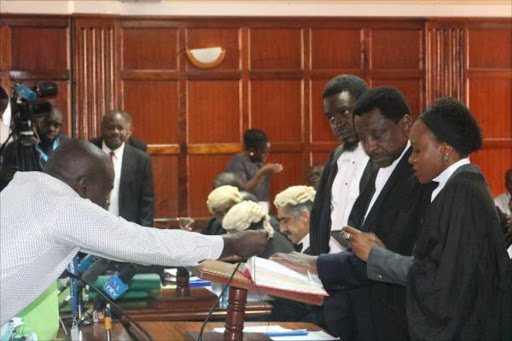 Lawyer James Orengo consulting with other advocates at the Milimani Law Courts on Thursday./COURTESY

Orengo says Qureshi, who was , lacks certificate of admission.

He told the five-judge bench that the gazette notice effecting the UK lawyer's appointment stated that he was only to prosecute criminal trials at the chief magistrates' court.

to handle the criminal case and the one at the high court isn't a criminal matter.

Orengo, also Siaya Senator, said the foreign prosecutor has no jurisdiction in challenging Mwilu's prosecution at the High court.

But Dorcas Oduor, the secretary of public prosecutions, told the bench that DPP has a right to appoint a counsel of his choice.

She told the court they will not be ready to proceed if Qureshi is not allowed to lead the prosecution team.

"Our office has right to be represented by anyone of our choice. We will not be ready to proceed if Qureshi isn't part of the team," she said.

Mwilu is facing charges of abuse of office, failure to pay stamp tax, improperly obtaining Sh12 million from Imperial Bank, and obtaining security for a loan by false pretence.

Post a comment
WATCH: The latest videos from the Star
by SUSAN MUHINDI @muhindi_suu
News
06 December 2018 - 12:00
Read The E-Paper