State to bring back bill to streamline transport in Nairobi 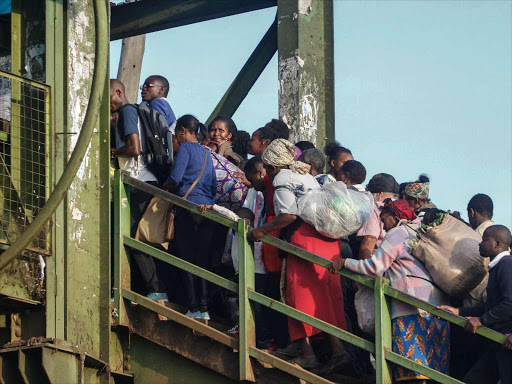 Nairobi commuters on a footbridge in Ngara on Monday /ENOS TECHE

The government will reintroduce the Nairobi Metropolitan Area Transport Authority Bill, 2017, in Parliament to streamline transport in the capital.

The Bill seeks to establish Nairobi Metropolitan Area Transport Authority (Namata) which will be tasked with implementing recommendations. The Bill was tabled in the National Assembly in March but was withdrawn by Majority leader Aden Duale to allow for further consultations.

Duale told the House that the Bill would be redrafted by the Executive to incorporate views from all stakeholders. Namata aims for an integrated, efficient and sustainable transport system within Nairobi, Kiambu, Machakos, Kajiado and Murang’a counties.

Macharia said governors from the five counties will be engaged. He told the Transport Committee led by vice chairman and Gatundu South MP Moses Kuria that some of the contents of the Bill have been operationalised by the government.

“We cannot discuss Namata issues in seclusion. All counties will be involved because it is not all about matatus but also infrastructural development. As stakeholders, we need to look at the wider concept,” Macharia said.

“I leave it upon this committee to ensure the Bill is approved.”

“We all know what happened when the bill was in this House. The person who is behind the recent transport crisis in the city is the same person who sabotaged this Bill,” Gachagua said.

Macharia said modalities will be put in place to end Nairobi transport problems. “The crisis that was witnessed will not occur again because all stakeholders will converge for the best interests of Kenyans,” the CS said.