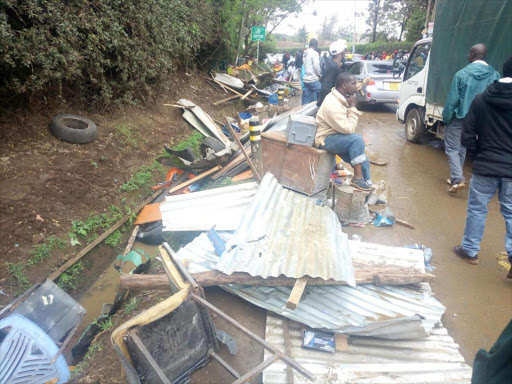 Part of the demolished structures at Jamhuri estate along Ngong Road./JULIUS OTIENO

Garage and shop owners along Ngong road are counting huge losses after their shops were demolished on Wednesday.

They claim that "hired goons' invaded their structures in Jamhuri estate at about 3 am and started pulling them down.

Lucas Ochieng, owner of one the garages claims he has lost more than Sh900,000 in the demolitions.

He had 70 youths working for him.

Ochieng said he has worked in the same place since 1996 and no one has ever claimed ownership the plot.

"We have always workers from here. Its only in July that a private developer, only identified as Maurice, claimed the ownership of the land," Ochieng said.

He asked them to vacate through his agent identified as "Nyagah".

"This is not a plot as has been claimed. This is a road reserve and anybody claiming it is a grabber," he said.

The youths or goons as they called them, are more than 100.

Woodley MCA Mwangi Njehia condemned the act, saying that it was inhuman to demolish the structures without issuing a notice.

Everlyne Akoth, who owned a Mpesa and beauty shop said she lost more than Sh150,000.

Governor Mike Sonko visited the scene and asked the affected to reconstruct their structures.