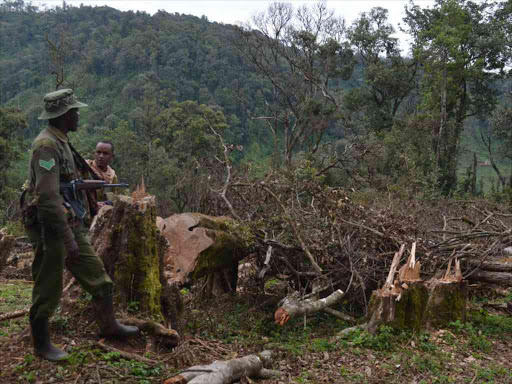 Finance executive Isaac Kamar wrote to the Chief Conservator of Forests on November 7 demanding payment of the money accrued for more than ten years.

Kamar says in his letter to KFS that the money was owed to three authorities in the region before 2013 when devolution took effect.

The amount has, however, since attracted interest over the years and accumulated annual rates amounting to more than Sh1.37 billion.

"The purpose of this letter is to ask you to remit this outstanding amount to the county government," Kamar in the letter.

The letter has also been copied to the County Ecosystem Conservator.

Kamar says before devolution, the bodies were owed Sh479 million and since 2013, the money owed to the county government has accumulated to more than Sh899 million.

Lands executive Abraham Barsosio said: "It's true the county has written to KFS demanding the payments. We hope they will remit the money to the county finance department."

He declined to state what action they would take if KFS does not pay the money. "They were paying initially and we are hoping they will do so as per our letter."

A confrontation also looms between the county and KFS after former Chief Conservator of Forests Emilio Mugo authorised Raiply Woods Company to be the sole firm allowed to harvest timber in major Elgeyo forests.

Raiply had requested for the authorisation to harvest trees in Kaptagat, Sabor, Kipkabus, and Tenant forests. Mugo gave the authorization before he .

The harvesting was, however, stopped following the government moratorium on forests which has been extended by one year.

However, Barsosio said they would not accept the authorisation to Raiply because it's unfair sidelines small sawmillers and residents in the region.

"It's like having a cow and your work is to hold the horns as someone else milks and goes away with all the milk," Barsosio said.

Post a comment
WATCH: The latest videos from the Star
by MATHEWS NDANYI
News
05 December 2018 - 15:00
Read The E-Paper