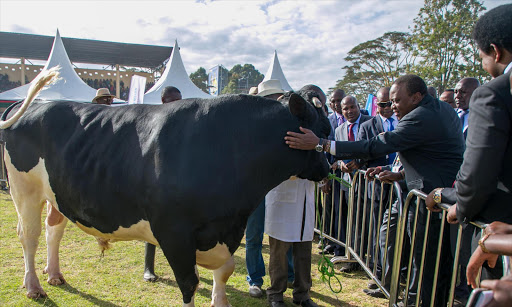 President Uhuru Kenyatta at the Narok Livestock Show on Tuesday, December 4, 2018. He urged herders to keep grade cows, which sell for a higher price than traditional breeds. /PSCU

President Uhuru Kenyatta has urged livestock farmers in Narok to shift to keeping grade cows to maximize their profits.

The President said due to advanced climatic changes and shrinking land availability, it is time the community considered abandoning traditional livestock wiped out by drought.

“There is no need for someone to say I have 1,000 or 2,000 cattle but when drought strikes, you are left with not even 200 cattle and when you take them to the market you get Sh2,000 or Sh3,000 for each because the cows are emaciated,” the president said.

Maasais are known to keep hundreds of livestock despite their low productivity.

“The time has come for us to adapt our culture to the needs of today,” Uhuru said.

The President spoke on Tuesday in Narok town during the inaugural Narok Livestock Show and Auction.

Livestock farmers used the occasion to showcase grade and interbreed cattle, some of which were auctioned off.

The event was attended by Narok governor Samuel Tunai and other leaders from the region.

The President urged the farmers to invest in grade cows whose profitability outweighs tenfold the traditional Zebu cattle farmers in the region keep.

“We must adopt new technologies if we are to survive. I have seen modern cows here which if you kept just 100, the profit in terms of cash, milk and meat is equal to that of 1,000 traditional cows.”

Uhuru said there is a ready market for meat and milk outside Kenya, especially in the Gulf and Middle East “but we must improve the quality”.

He told the farmers that keeping a few high-grade cows will leave them with extra land to plant grass and bale it for use during the dry season.

Uhuru said the government is committed to supporting farmers and has already set aside Sh3 billion for agricultural projects in the county.

He said together with the Narok county government, the national government has bought coolers to ensure milk delivered by farmers for processing is of good quality.

“That is value addition and that is what we need,” Uhuru said.

The President also said the government has set aside Sh1.5 billion for the construction of a tannery for processing hides for the leather market.

This, he said, will provide employment for youth in Narok county through the manufacture of leather products.

Post a comment
WATCH: The latest videos from the Star
by EMMANUEL WANJALA @ItsWanjala
News
04 December 2018 - 18:00
Read The E-Paper