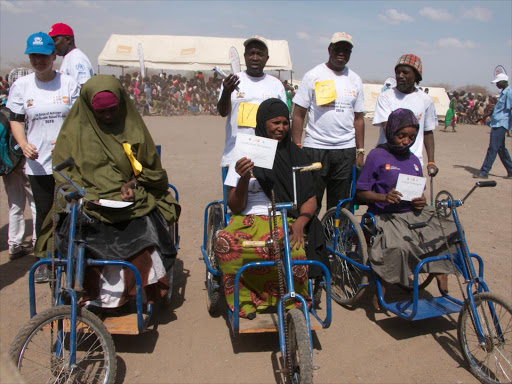 Some of the winners of the Kakuma Community Run ./DIANA KENDI

Survivors of sexual and gender-based violence living in refugee camps have been told to report the cases within 72 hours whenever they happen.

The call was made on Tuesday during a 10km community run organised by the UNFPA and the UNHCR at Kakuma-Kalobeyei settlement scheme.

The race was held to mark this year’s International Day for the Elimination of Violence Against Women during the 16 days of activism.

"Running brings the community together because one of their passionate sports is athletics," Neville Agoro, the livelihoods technical specialist at the Danish Refugee Council said.

"We used the community run to bring everyone together for a common goal to end sexual and gender-based violence."

Some of the winners of the Kakuma Community Run./DIANA KENDI

Humanitarian specialist at UNFPA John Wafula said the run was done in the community so that people will be made aware of the services they provide.

The competition brought together refugees from Kakuma, the host community and people living with disabilities.

The theme for this year's race is, ‘Ending sexual and gender-based violence in the world of work’.

"I'm so happy I've won the race for the persons with disabilities. I'm a refugee from Somalia living in Kakuma. I believe that sexual and gender violence against women can end if we all commit to fighting against it," said Farziah Yatur, one of the winners in the women's category.

"We are not just running to win, we are running to defeat gender-based violence," Opaffe, a refugee from South Sudan said.

Another winner Nancy Lokoor, 17, from South Sudan and David Lopeit said sexual and gender violence happens in the refugee camps too. They said this makes women vulnerable in camps.

However, they said such events will not only involve the community but motivate them to use their gifts and talents to fight vices in the society.

"Here in Kakuma we have upcoming athletes who need support to achieve their dreams in the world of sports, Lopeit said.

Wafula said many cases are usually reported past 72 hours, putting survivors at risk of contracting HIV.

"Our reports show most of the survivors of sexual violence suffer in silence and that’s why we are here to urge them to speak out so that they can get help from our support centres," he said.

"Sexual exploitation happens even in the refugee camps. It’s important for us as an organisation to ensure that we are not leaving anyone behind in the fight against gender-based violence and promoting access to reproductive health rights."

The 16 Days of Activism against gender-based violence is usually marked annually from November 25 to December 10 to campaign against violence against women and girls.