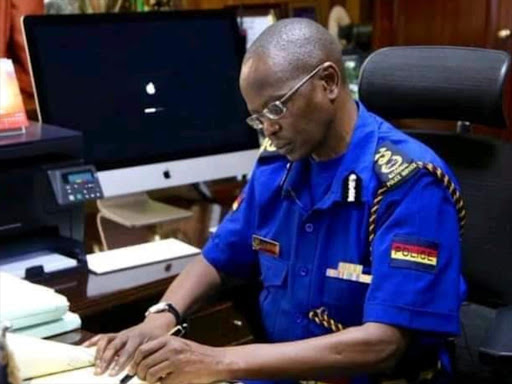 Inspector General of Police Joseph Boinnet in his office on Tuesday in the new police uniform. /COURTESY

Inspector General of Police Joseph Boinett on Tuesday appeared for the first time wearing the new blue police uniform in his office ahead of the December 12 official adoption.

The new police wear was unveiled on September 13 by President Uhuru Kenyatta for use by the general duty police officers.

He said the bright blue colour will ensure "better visibility of the officers”.

Uhuru said the new police unit will constitute officers merged from the Kenya Police Service and the Administration Police.

Boinett said the new attire would be adopted despite the harsh criticism from the public and a section of officers.

"There seems to be discomfort about this, but the public is welcome to give ideas on the new uniforms,” Boinett said on September 18 at the third Editors Guild Press Club luncheon.

Soon after the uniforms were unveiled, Kenyans took to social media to express their disapproval of the new police outfit.

Some described it as "very ugly".

“Very very ugly! The old one was much better!" tweeted Paul Mwariri.

"There are many other things that need to be changed in the police...uniform is not one of them!” he added.

His sentiments were shared by the majority of those who expressed dissent.

The old navy blue trouser, matching beret and sweater and the blue shirts

will officially be dropped by the police service during this year's Jamhuri Day on December 12.