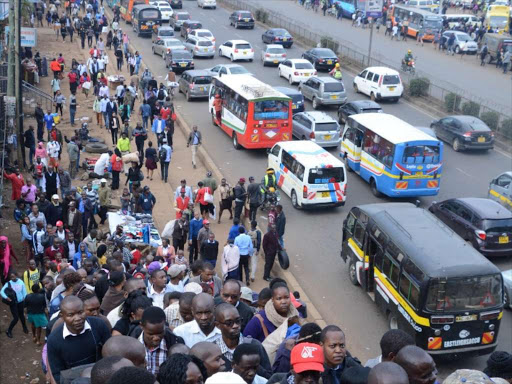 Kenyans walk after the ban of matatus from the CBD took effect on Monday, December 3, 2018. /JULIUS OTIENO

Nairobi Senator Johnson Sakaja is set to go to

court on Monday to file a petition against the ban of matatus from the Central Business District.

Through Mwenje and Karanja advocates, he

wants the suspension of the order to be based on lack of public participation.

The petition further states that the legal notice is unreasonable and unfair.

Other grounds include violation of legitimate expectations, irreparable losses by the public and public interest overrides policy.

On Sunday, Sakaja said the move to ban matatus from the CBD is premature, not well thought out and unfair to ordinary citizens.

“The Nairobi County Government must reverse this decision today! You don’t ban matatus from the CBD before providing alternative means of transport," Sakaja said.

"What happens to those with luggage, children, the elderly, disabled persons, where’s the security? Think about the people before making such declarations!,” he said.

The county government on Thursday gave a notice that no public service vehicles will be allowed in the CBD.

Sakaja said Governor Mike Sonko should consider the welfare of the people.

Ironically, when a similar directive was given by former Governor Evans Kidero, then Senator Sonko went to court and he got a stay order.