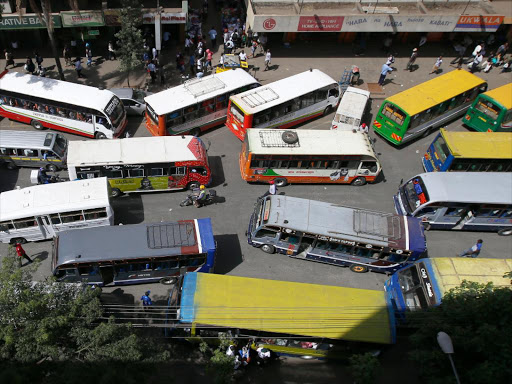 Matatus seen along Tom Mboya Avenue in Nairobi on March 30, 2016. The stakeholders in the Matatu sector reacted angrily to the the passed Motion by the county Government to see all public service vehicles banned from the city centre in an effort to decongest the city. Photo/Jack Owuor

Will the new efforts by Nairobi governor Mike Sonko to remove matatus from the city centre succeed?

This is not the first time the county is planning a raft of new measures to end congestion in the city.

His efforts to clear the CBD did not, however last, for he

Kisia's plan was to keep matatus from Thika and parts of the Central, Rift Valley, Kisii and Kilgoris out of the Central Business District.

Those from Thika were to end their journeys at Kariorkor at a parking space meant for the market.

When Evans Kidero took over as the first Governor of Nairobi in 2013, one of his key areas of focus was on the matatu menace

He said the order to ban commuter matatus from the Nairobi Central Business District was to be put in place by September that year.

However, his plan never actualised but

relented his stand and the matatus where left to operate within the city centre for his entire term.

Kidero's administration had been grappling with how to decongest the city. It proposed a raft of measures, some which were criticised by residents after a short trial.

In 2014, he signed a memorandum of understanding with Foton and Beijing Municipal Commission of Transport for the supply of high capacity buses at a cost of Sh6.4 billion.

City Hall said the MoU was for the supply of the first 266 buses to launch the planned metro transportation system.

This was marred by corruption allegations, leading to the sacking of then Transport executive Evans Ondieki.

The attempt to remove roundabouts in some section of roads in the city also failed to work, forcing the county to shelve the project.

Sonko took over as the second Governor after he was elected in 2017 General Election.

He pledged to remove the matatu's from the CBD in the first 100 days in office. This did not happen after he changed his mind to allow for wider consultations.

The plan was to allow

only two matatus from one sacco

to stop at any given termini at the same time.

Matatus were also supposed to operate from holding points outside the city and only be allowed once the others have departed.

the government embarked on a plan to reintroduce a vibrant commuter train services within the city.

said the government had opted to introduce more trains as opposed to buses amid efforts to reduce congestion in the city.

The government had in April announced that Thika Road will have a dedicated lane for public service vehicles.

Macharia had told the Senate’s Roads Committee that Thika Road is one of six corridors into the city identified by the authorities in a bid to reduce congestion in the capital city.

“We need more than 900 buses in these six corridors and because we don’t have them, we have opened one corridor, the Thika Highway. We are starting the demarcation and dedication of that lane,”