Court declines to suspend order of ban on matatus in CBD 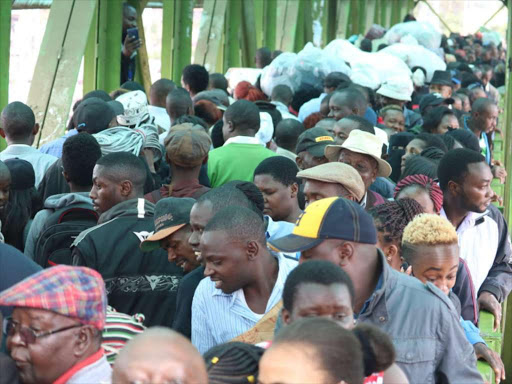 Commuters walk after being dropped off at Ngara, Monday, December 3, 2018. /VICTOR IMBOTO

The High Court on Monday declined to suspend an order barring matatus from accessing Nairobi CBD.

Justice Pauline Nyamweya directed the parties to file and serve their petitions to the respondents.

Both cases, one filed by Nairobi senator Johnson Sakaja and the other by matatu saccos will be heard on Thursday this week.

Nairobi governor Mike Sonko has told commuters to be prepared to walk to the city centre.

While appearing before the Senate Public Investment Committee Sonko asked commuters to be patient and to support his efforts to decongest the city.

Twenty-one saccos had gone to court seeking to quash a decision by the Nairobi County Government barring their vehicles for entering the CBD.

They argue that the decision was made without taking into consideration that the operators have valid transport licences that allow them to operate in the central business district. The county has issued picking and dropping permits to the matatu operators.

Nairobi Senator Johnson Sakaja went to court too to file a petition against the ban of matatus from the Central Business District.

Through Mwenje and Karanja advocates, he wanted the suspension of the order to be based on lack of public participation.