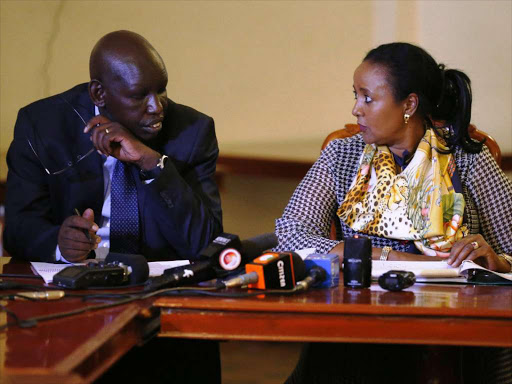 Education CS Amina Mohamed (R) with PS Belio Kipsang when she appeared before the Education Committee of parliament to brief the members of the level of preparedness for the upcoming National Examinations. October 9, 2018. Photo/Jack Owuor

The Education ministry on Monday will begin selection and placing of KCPE exam candidates in secondary schools.

A circular dated on November 28 says selection will be conducted on two levels. National will focus on national schools and regional will target extra-county and county schools.

The national schools selection process will begin on December 3 and will be followed closely by the regional level on December 5.

The drive will be conducted in 10 regions. They are North Rift, Mombasa, South Rift, Kisumu, Kakamega, Metropolitan, Central, Machakos, Garissa and Meru.

The government has said all those who sat the KCPE exam will transition to secondary schools.

According to the ministry assessment carried out last week, the new public schools and vacancies in the previous ones can accommodate one million new learners. The remaining students will be factored into private schools.

The selection guidelines reveal that at national, extra-county and county schools selection is fully computerised and based on merit and candidates’ choice.

A system will allow five top boys and girls in every subcounty to be placed in national schools of their choice. “The top three will be selected first across all subcounties and the remaining two according to their marks because there are areas with very few students, hence, the equity requirement,” the selection guidelines read.

The 103 national schools have been grouped into four clusters. The first cluster contains 30 schools, the second 25, third 18 and fourth 28.

The third cluster is that of best national schools, with several being on the original list of the top 17 national schools that have been in existence for more than 30 years.

Education CS Amina Mohamed said Form One intake and reporting to schools will take place between January 8 to 12 next year.

Education CS Amina Mohamed said Form One intake and reporting to schools will take place between January 8 to 12 next year.