Harambee Stars nominated for CAF Team of the Year award 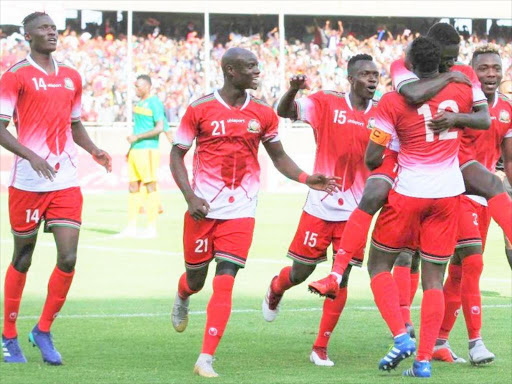 Harambee Stars has been nominated for the Team of the Year Award by CAF alongside, Guinea Bissau, Zimbabwe, Uganda, Mauritania and Madagascar. /COURTESY

Harambee Stars has been nominated for the men’s national team of the year award by the Confederation of African Football.

Stars, who are on the brink of qualifying for the 2019 African Cup of Nations in Cameroon, has been nominated alongside Guinea Bissau, Madagascar, Mauritania, Uganda and Zimbabwe.

This follows Kenya’s good run in the 2019 AFCON qualifiers where the Stars beat Ghana and Ethiopia respectively to move top of Group F with seven points.

The historic 1-0 victory over Ghana’s Black Stars at Kasarani stadium was followed by a barren draw away to Ethiopia Bahir at Dar Stadium followed by a 3 nil mauling of the Walia Ibex in Nairobi.

Stars, under French tactician Sebastien Migne are on the verge of making it to the continental showpiece for the first time since their last appearance in Tunisia in 2004, under Jacob “Ghost” Mulee.

Migne’s men needed only a win to sail through to Cameroon 2019, but their round five qualifier against Sierra Leone in Nairobi was cancelled by CAF

Stars also finished second at the Hero Intercontinental Cup in India in June, during the four-nation tournament in which Chinese Taipei and New Zealand also took part.

The final awards gala will be held on Tuesday, January 8, 2019, in Dakar, Senegal.