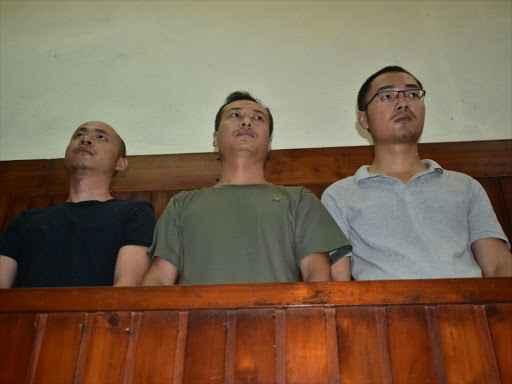 Three Chinese charged with an attempt to bribe DCI officers Sh500,000 to stop investigations into a ticketing scam at the SGR have been denied bond.

employees of China Roads and Bridge Corporation sought to be released on bail.

But in his ruling, chief magistrate Julius Nang'ea said they are a flight risk and have no fixed place of residence.

He also said that if released, they may interfere with witnesses given they were arrested for trying to bribe officials investigating them.

Nang'ea said if found guilty, the three would face 10 years in prison.

Defence lawyers Nelson Sitonik and Queenton Ochieng applied for bond urging that their clients reside at the SGR staff quarters at Mombasa terminus.

They had also pleaded with the court to confiscate travel documents of the three to allay fears of the accused being a flight risk.

The prosecution argued that the accused may be interdicted by the employer and therefore, leave staff quarters.

Once they fly out, it would be difficult to get them because Kenya and China have not extradition treaty, the prosecution said.

The case will proceed on December 10 for pre-trial.