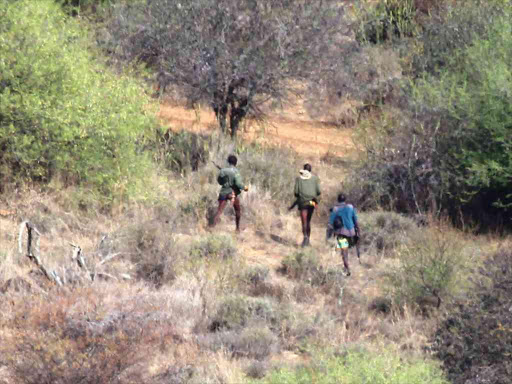 Renewed invasions of white-owned ranches by herders in

Kenya's northern Laikipia region a year after similar invasions led to deadly conflicts is a sign of cracks in the country's land use system, experts said on Wednesday.

A herder was shot dead when police tried to confiscate his cattle after they invaded one of the ranches last week, police and ranchers said.

"That herder was killed as a matter of self-defence by the police," Martin Evans, chairman of the Laikipia Farmers Association, told the Thomson Reuters Foundation by phone.

Dozens were killed and injured in

"Right now, it is very dry out there," Evans said. "The November rains have failed and if it doesn't rain between now and April the situation is going to get worse."

Francis Munyambu, the Rift Valley police commandant, said the shooting was under investigation but security in the region had returned to normal.

Increased droughts due to climate change, as well as population growth and the enclosure of public lands, have pushed many traditional nomads to move onto grazing land on private ranches.

"This is really putting pressure on normal pastoralists in terms of where they are going to access pasture and water," said Nyangori Ohenjo, program manager at Centre for Minority Rights Development.

Each cow needs at least 10 acres of land to be healthy, Evans said, but the large herds of cattle kept by pastoralists was leading to depletion of grazing land.

"All the land in the north is already destroyed and that's why they are moving southwards," he said.

The conflict in Laikipia highlights the struggle for land between indigenous communities and conservationists across the world, Ohenjo said, and is partly a legacy of

British colonialists gave most of Laikipia to Europeans after getting the Maasai to sign a treaty in 1911 agreeing to move some 300 kilometres (186 miles) southwest to a native reserve.

Kenyatta gave or sold most of the departing whites' land to his own ethnic group, the Kikuyu, many of whom had also lost their land under colonialism.

Kenyans, foreigners and conservationists have bought land in Laikipia.

"There has always been a misconception previously that some land was under-utilised or idle and that's how you got all this land taken away for other uses," Ohenjo said.

This contested land ownership has been a source of friction, with politicians fuelling the conflict by instigating invasions into land that belong to ranchers, said Maria Dodds, a rancher in Laikipia whose property was invaded last year.

Former Laikipia North member of parliament Mathew Lempurkel, of the Samburu tribe, was charged in court last year for inciting herders to evict white landowners ahead of the 2017 elections. The case was dismissed in May for lack of evidence.

Lempurkel declined to comment on the recent ranch invasions.